Home > Back to Search Results > Vermont ratifies the Constitution...
Click image to enlarge 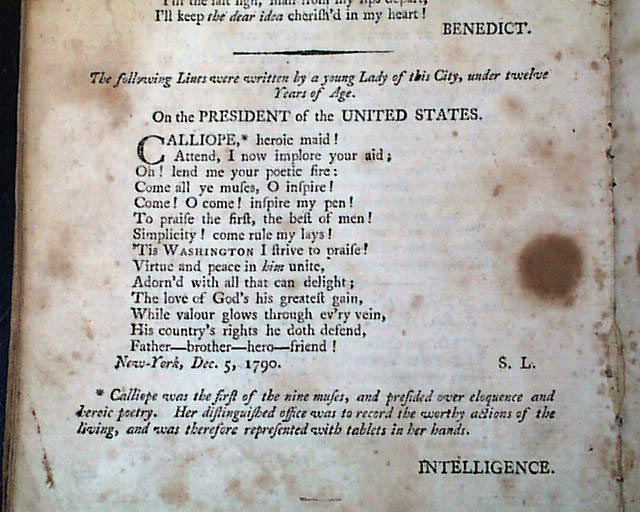 Near the back is a poem: "On the President of the United States" written by a: "...young lady of this city under twelve years of age."
Also various "Intelligence" with news reports from Georgetown, Albany, Richmond & elsewhere, including a historic report noting: "...from Vermont we are informed that the Convention of that state...for the purpose of taking into consideration the Constitution of the United States, adopted and ratified it on Monday the 10th, by an unanimous vote..." with a bit more.
Also mention that: "...By the accession of Vermont another link is added to the federal chain; and, as a bill for the admission of the district of Kentucky into the union is now pending before the senate..." with more on this.
Certainly one of the less common 18th century American magazine titles, existing from just 1790 to 1797.
No plates are present.
Complete in 56 pages, still has the full title/contents page, 5 by 8 inches, some wear & foxing to the title page, a library deaccession stamp to the title page, generally good.