Home > Back to Search Results > Second battle of Quebec...
Click image to enlarge 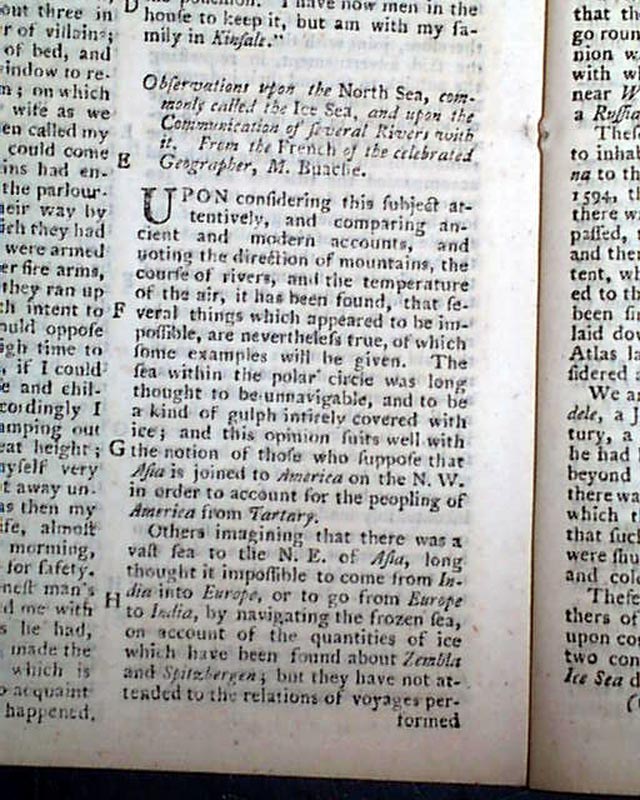 Included is a detailed article: "Observations Upon the North Sea..." which is quite detailed and takes two pages. The accompanying map called for is lacking.
Also in this issue are: "Act for Better Supplying the City with Fish" "Case of a Paralytic Patient Cured by Electricity" "New Method of Discovering the Longitude" "Transit of Venus over the Sun, the 2nd since the Creation" which includes a print of it; "An Approved Remedy for Contraction in the Joints" "Effects of the Miseries of Human Life" "The Aurora Borealis in its Various Appearances" "Disposition of His Majesty's Forces and Fleet" which includes much detail.
Near the back is the Historical Chronicle which gives various news reports of the day and which includes a report that: "...on the 28th of April Brig. Gen. Murray, with 3000 men of the garrison of Quebec, attacked near that place...and after a warm and obstinate engagement with a considerable loss of men...was obliged, by the superiority of the enemy's numbers, to retire back into Quebec..." with more.
A bit further on is another report with considerably more detail and taking two pages of text, signed in type: Ja. Murray, commander of the British forces.
Two plates are present, one of which is called for in the February issue.
Complete in 48 pages, 5 by 8 inches, some light damp staining. The full title/contents page is lacking, otherwise good condition.