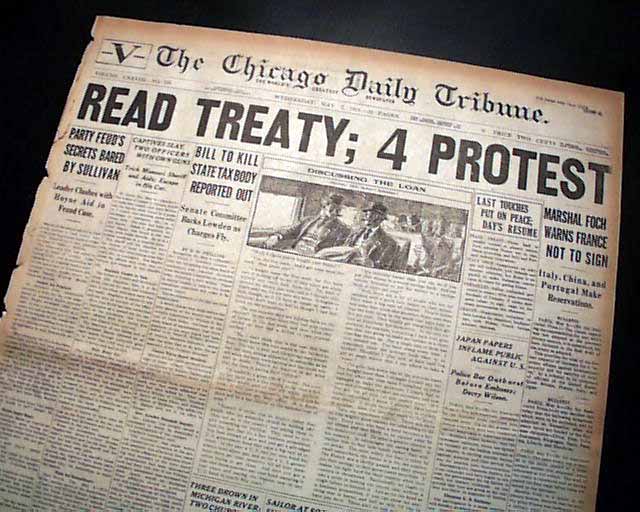 The front page has a nice banner headline: "READ TREATY; 4 PROTESTS" with subheads. (see)
Complete with all 32 pages, light toning and some wear at the margins, a little irregular along the spine, generally good. Should be handled with care.

wikipedia notes: The Paris Peace Conference was the meeting of the Allied victors following the end of World War I to set the peace terms for Germany and other defeated nations, and to deal with the empires of the defeated powers following the Armistice of 1918. It took place in Paris in 1919 and involved diplomats from more than 29 countries. They met, discussed and came up with a series of treaties ("Paris Peace Treaties") that reshaped the map of Europe and the world, and imposed guilt and stiff financial penalties on Germany. At its center were the leaders of the three "Great Powers": President Woodrow Wilson of the USA, and Prime Ministers David Lloyd George of Great Britain and Georges Clemenceau of France, with Prime Minister Vittorio Orlando of Italy being the next most powerful figure to create the "Big Four". Germany and Russia were not invited to attend, but numerous other nations did send delegations, each with a different agenda. Kings, prime ministers and foreign ministers with their crowds of advisers rubbed shoulders with journalists and lobbyists for a hundred causes, ranging from independence for the countries of the South Caucasus to women's rights. For six months Paris was effectively the center of a world government, as the peacemakers wound up bankrupt empires and created new countries. The most important results included a punitive peace treaty that declared Germany guilty, weakened its military, and required it to pay all the costs of the war to the winners. This was known as the War Guilt Clause that was included in the final Treaty of Versailles. The Austro-Hungarian Empire had ceased to exist as its disparate peoples created new states. The Conference also created the League of Nations.

Historians debate whether or not the terms imposed on Germany helped the rise of Nazi Germany and were thus a cause of World War II, and whether the terms were the best that could be expected, given the mood of the victors.