Home > Back to Search Results > Civil unrest in 1913 Seattle...
Click image to enlarge 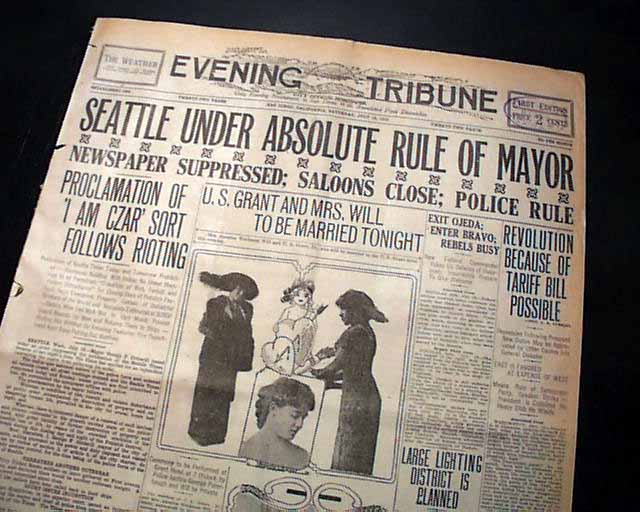 The front page has a nice banner headline: "SEATTLE UNDER ABSOLUTE RULE OF MAYOR; Newspaper Suppressed; Saloons Close; Police Rule" with subheads. (see) Nice for display. Surprisingly this issue is in good condition being from the "wood pulp" era. Very hard to find issues that are not totally fragile from this era in paper.
Complete with 22 pages, two small library stamps within the masthead, generally nice.

wikipedia notes: As mayor, Cotterill instigated an anti-vice campaign that raised civil liberties issues, and he soon became embroiled in other issues, as well. There were thousands of vice-related warrantless arrests, and the crackdown on vice may simply have created new and different modes of police corruption.
At this time, Seattle had a big summer celebration known as Potlatch Days, the name deriving from the potlatch ceremonies of the indigenous peoples of the region. In summer 1913, during the Golden Potlach celebration, Blethen succeeded in stirring up already hot tempers and sparking a riot that destroyed the local offices of the Industrial Workers of the World and of the Socialist Party. Cotterill shut down the saloons, suspended all street meetings, and attempted to close the Seattle Times. In this last, he was stopped by a judge; he and police chief Claude Bannick nearly found themselves arrested. However, he survived a recall attempt instigated by Blethen.