Home > Back to Search Results > Print of Crown Point and Cape of Good Hope... Article by Ben Franklin...
Click image to enlarge 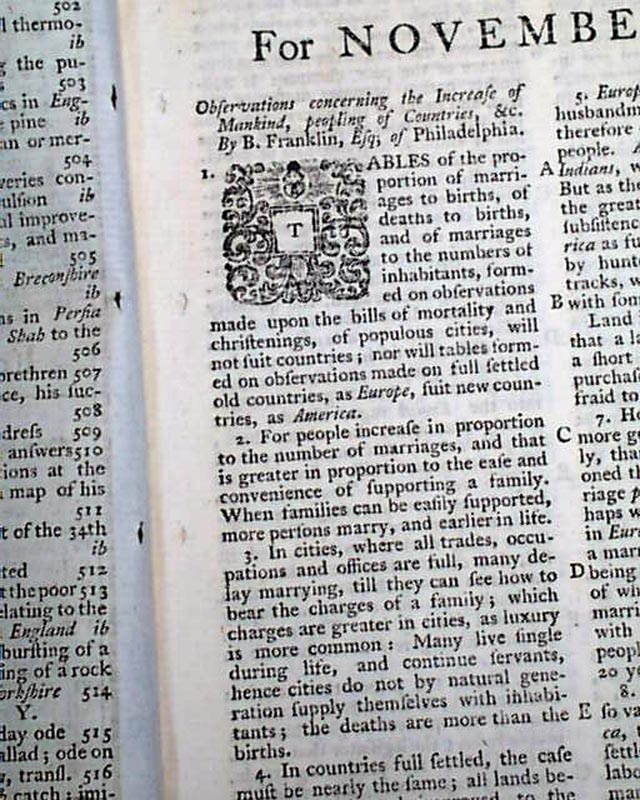 Print of Crown Point and Cape of Good Hope... Article by Ben Franklin...

Item # 676545 GENTLEMAN'S MAGAZINE, London, November, 1755  Of great interest is: "Observations Concerning the Increase of Mankind, Peopling of Countries, etc. By B. Franklin, Esq. of Philadelphia", which takes 3 pages.
Near the back are two prints on a single page, one headed: "Plan of Fort Frederick at Crown Point" and the other a map showing a much wider area including Lake George, the Hudson River, Lake Champlain & more.
There is descriptive text on the same page as well, beginning: "This fort, which is very strong, is situated on the south side of the gut, or river, which connects Lake George...with Lake Champlain. It is a regular fortification defended on every side by redouts..." with much more.
Very nice  to have a print and small map from the French & Indian War.
Other items in this issue which relate to the French & Indian War include: "State of the Present Disputes in Pennsylvania as Represented by both Parties: In Favour of the Governor - In Favour of the Assembly", and "Sketch of an Act for the Defence of the British Colonies in North-America".
The "Historical Chronicle" has a detailed article taken from the New York Mercury which is on the: "...particulars of the Defeat of the French by Gen. Johnson..." with the text concerning the military events in America taking 1 1/2 pages.
Also: "Account of the British Settlements in N. America: of Maryland" which takes 1 1/2 pages; "Curious Account of a Merman or Mermaid" and more.
Present is one of the two plates called for.
Complete in 48 pages, 5 1/4 by 8 1/4 inches, full title/contents page featuring an engraving of St. John's Gate, very nice condition.