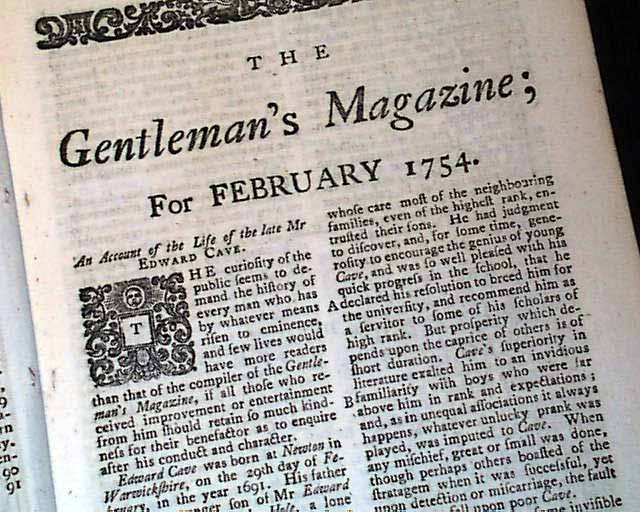 THE GENTLEMAN'S MAGAZINE, London, February, 1754  Near the back is a half page poem titled: "To Benjamin Franklin, Esq., of Philadelphia, on his Experiments and Discoveries in Electricity" which is dated from "Cooper River, S. Carolina, Sept. 20, 1753".
At the bottom of the poem are two footnotes, one reading: "By the application of a rod of iron, or a wire, the effect of thunder and lightning is prevented." and the other: "The steeple and organ of St. Philip's church at Charles Town [Charleston] have been twice damaged by lightning."
Near the back is the "Historical Chronicle" which has the latest news reports of the day including an item under "Plantations" being a report from Virginia.
The first article in the issue is: "An Account of the Life of the late Mr. Edward Cave" the publisher of this magazine who had recently died. There is a half page illustration of "Pan and His Symbols" and an illustration of the "Rush Light Larum" with a related article: "An Expeditious Way of Raising Mushrooms".
Also in this issue are: "Seeds of Forest Trees & Shrubs in Pennsylvania" "Instructions to the Governor of New York" "Description of a New Invented Tackle" which includes a half page illustration; "Islington Church" which includes a nice full page plate, and also a foldout bridge plate.
The other plate called for is lacking.
Complete in 48 pages, 5 by 8 inches, full title/contents page featuring an engraving of St. John's Gate, very nice condition.