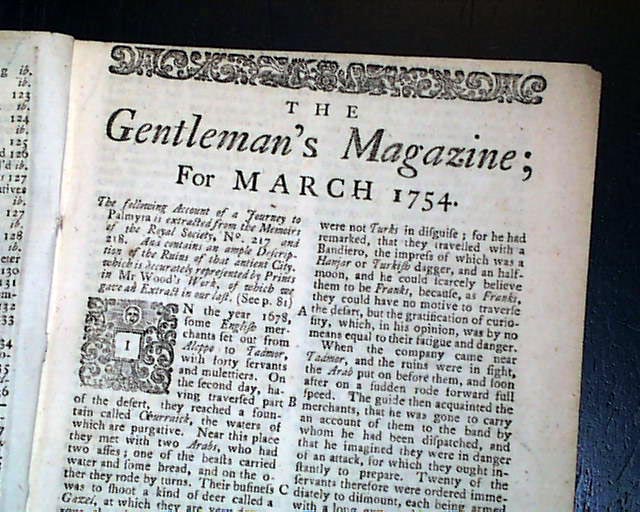 Item # 676540
GENTLEMAN'S MAGAZINE, London, England, March, 1754
Perhaps the most interesting item is a very nice, detailed article titled: "Some Account of a Chart lately published by M. de l Isle, with the different Conjectures and Opinions it has produced; from a Tract called, A Letter from a Russian Sea Officer to a Person of Distinction at Petersborough, &c."
This article relates the exploration of the far northwest section of North America, the area of present-day Alaska and the Yukon. There is talk of Mr. "Beerings" meant to be Vitus Bering, who is credited with many of the discoveries of the area, and who was commissioned by Czar Peter the Great.
The article begins: "All Attempts to discover an outlet from Hudson's Bay into the South sea having been ineffectual, and the space between Japan and California, an extent of more than 1200 leagues, being totally unknown, the late Czar Peter the great, appointed one Beerings to attempt the discovery..." with much more. The article takes 4 1/2 pages & discusses the routes of three explorers.
Other articles in this issue include: "...Account of a Journey to Palmyra..." which includes a nice foldout plate of the ruins there; a mostly full page of illustrations of: "An Anemometer, or new Invent'd Weather-cock which shews the Utmost Velocity of any Wind..." with an article on it as well; "The Azimuth Compass Improved" with an illustration of it; and so much more.
Near the back is the "Historical Chronicle" with the latest news reports of the day, including a few brief items headed "Plantations" from Boston & New York, one noting the marriage of an 85 year old man to a 78 year old woman, and the other: "Our assembly has past a severe act against importing counterfeit British half-pence."
Included are two plates but one is called for in the March issue.
Complete in 48 pages, full title/contents page with an engraving of St. John's Gate, 5 by 8 inches, nice condition.