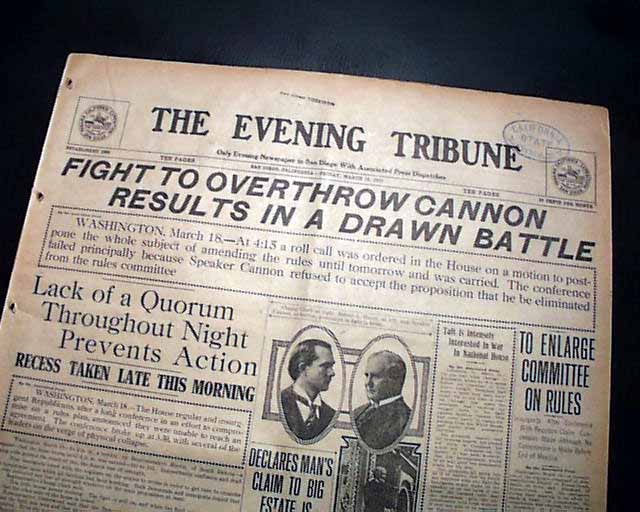 The front page has a nice banner headline: "FIGHT TO OVERTHROW CANNON RESULTS IN A DRAWN BATTLE" with subheads. (see) Nice for display. Surprisingly this issue is in good condition being from the "wood pulp" era. Very hard to find issues that are not totally fragile from this era in paper.
Complete with 10 pages, small library stamp within the masthead, some small binding holes along the spine, tape mend along the bottom margin, generally nice.

wikipedia notes: On March 17, 1910, after two failed attempts to curb Cannon's absolute power in the House, Nebraska Representative George Norris led a coalition of 42 progressive Republicans and the entire delegation of 149 Democrats in a revolt. With many of Cannon's most powerful allies absent from the Chamber, but enough Members on hand for a quorum, Norris introduced a resolution that would remove the Speaker from the Rules Committee and strip him of his power to assign committees.