Home > Back to Search Results > A skirmish in North Carolina from the French & Indian War...
Click image to enlarge 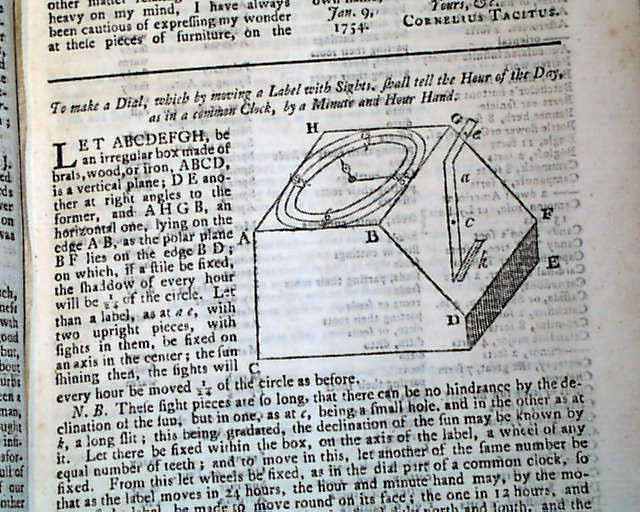 A skirmish in North Carolina from the French & Indian War...

Item # 676500 THE GENTLEMAN'S MAGAZINE, London, January, 1754  Among the articles in this issue are: "Description of a Remarkable Venomous Insect found in South America"; an article concerning a form of sun dial with an illustration of it; "Of the Junction of Asia and America" which begins: "The termination  & position of the N.E. parts of Asia, and the N.W. parts of America, & whether they are joined or not, has been matter of speculation for 200 years..."; "Progress of the Plague in Marseilles" "Enquiry into the Causes of Dreams" and much more.
Near the back is the "Historical Chronicle" which has the latest news reports of the day including a section headed: "America" with news of new taxes on coaches, etc. Also a note from Rowan County, North Carolina, of: "...a skirmish has lately happen'd between some French Indians & the Catawbas in alliance with the English...".
Lacking the plates called for.
Complete in 52 pages, 5 1/4 by 8 1/4 inches, full title/contents page with an engraving of St. John's Gate, very nice condition.