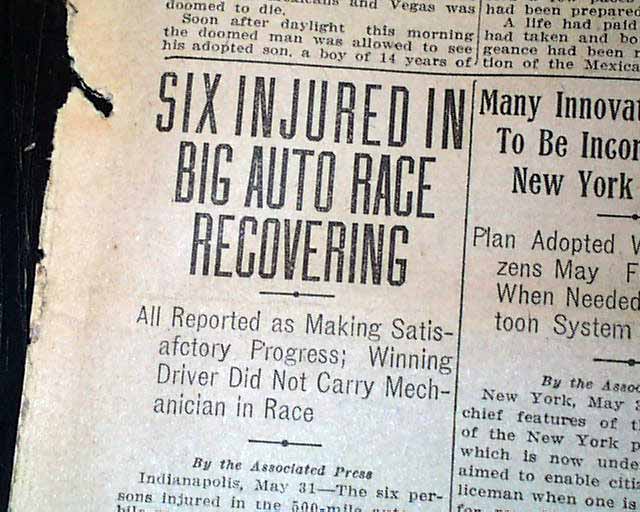 The front page has a one column heading: "SIX INJURED IN BOG AUTO RACE RECOVERING" with subhead. (see) Surprisingly this issue is in good condition being from the "wood pulp" era. Very hard to find issues that are not totally fragile from this era in paper.
Complete with 10 pages, small library stamps within the masthead, irregular along the spine, generally nice.

wikipedia notes: The first "500" was held at the Speedway in 1911 on Decoration Day, May 30, (as it was known from its inception in 1868 to 1967, when federal law made "Memorial Day" the official name), run to a 600-cubic-inch (9,800 cc) maximum engine size formula. It saw a field of 40 starters, with Harroun piloting a Marmon Model 32-based Wasp racer—outfitted with his invention, the rear-view mirror. Harroun (with relief from Cyrus Patschke) was declared the winner, although Ralph Mulford protested the official result. Eighty thousand spectators were in attendance, and an annual tradition had been established. Many considered Harroun to be a hazard during the race, as he was the only driver in the race driving without a riding mechanic, who checked the oil pressure and let the driver know when traffic was coming.