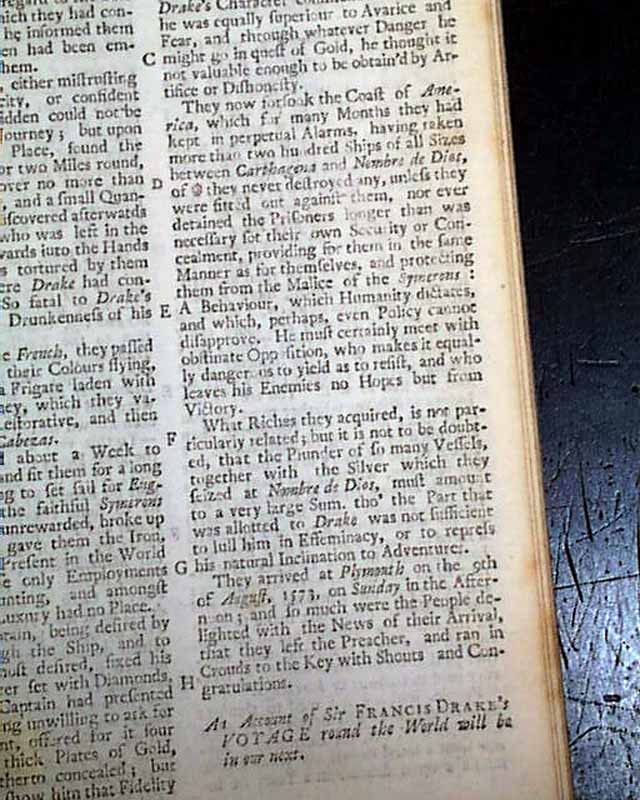 Near the back is a section headed: "Historical Chronicle" with news from England & other parts of Europe, plus a report datelined "Hampton Road, Virginia, July 24, 1740" which takes a full column telling of military affairs at St. Augustine, with mention of General Oglethorpe & others.
Included is: "...The 27th the General summon'd the Spanish Governor to surrender, who sent him world, he should be glad to shake hands with him in his castle. This haughty answer was occasion'd from a dear bought victory..." with much more. This is considered part of the "War of Jenkin's Ear".
Among the articles noted in the table of contents are: "Speech of the Prime Minister" "A Defense of Infant Baptism" "Life of Sir Francis Drake continued"  which takes 2 1/2 pages and includes: "...They now forsook the coast of America, which for many months they had kept in perpetual alarms, having taken more than 200 ships of all sizes...", and more. One of the pages has an interesting engraving of the moon found in an article: "Occulation of Jupiter by the Moon".
Complete in 38 pages, 5 by 8 inches, small piece from the margin of the front leaf, good condition.