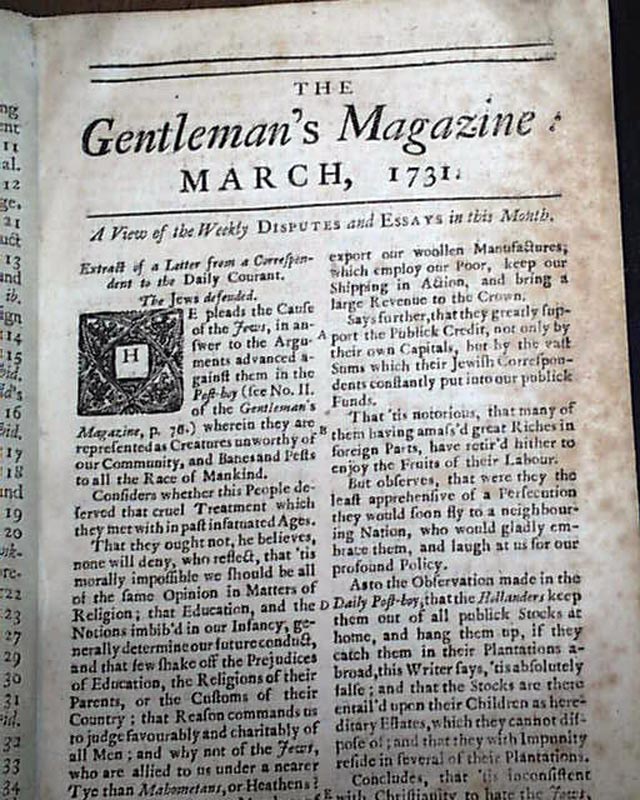 * Supporting criticism of the Jews
* Early report from Boston

This is just the third issue of this extremely successful magazine. Several editions of the first several issues were printed in the early 1730's, and based on the note at the bottom of the title/contents page this is the "Third Edition".
Most notable and taking the entire first page is an article in defense of the Jews, beginning: "He plead the cause of the Jews...wherein they are represented as creatures unworthy of our community and banes and pests to all the race of mankind..." and goes on to defend them, concluding with: "...that 'tis inconsistent with Christianity to hate the Jews since they have no antipathy to Christians as appears by sending their children to Christian schools, and encouraging them to converse with Christians."
Listed under "Foreign Affairs" is an early report from "Boston in New England".
Much of the balance of the issue is comprised of reviews of items in newspapers of the day including Fog's Journal, The Universal Spectator, The Grub Street Journal, the London Journal, The Craftsman, The Daily Courant and others.
Near the back is "The Monthly Intelligencer" with the latest news reports and includes: "An Account of the Malefactors Executed at Tyburn" with various details of the crimes of 5 men, one noting: "...he joyn'd himself with whores, thieves, and other abandon'd wretches, and gam'd away his money  sometimes his cloaths...seem'd to have but little contrition but what proceeded from the near approach of death."
There were no plates or maps in such early issues of this magazine.
Complete in 48 pages, 5 by 8 inches, full title contents page, minor dirtiness, good condition.