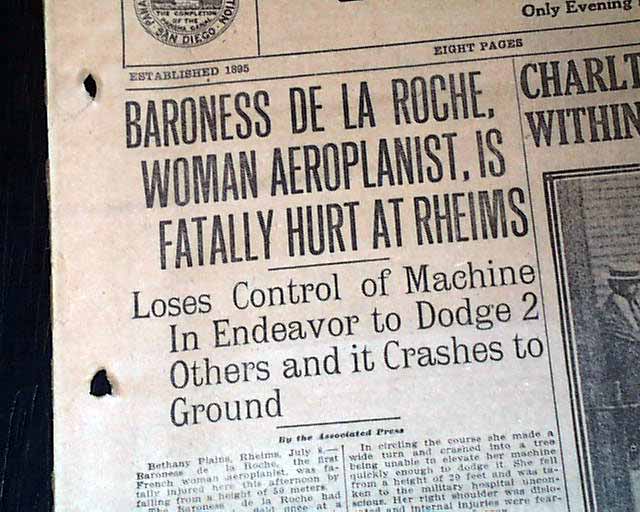 The top of the front page has a two column headline: "BARONESS DE LA ROCHE, WOMAN AEROPLANIST, IS FATALLY HURT AT RHEIMS" with subhead. (see) Surprisingly this issue is in good condition being from the "wood pulp" era. Very hard to find issues that are not totally fragile from this era in paper.
Complete with 8 pages, small library stamp within the masthead, some small binding holes along the spine, tape mend along the bottom margin, generally nice.

wikipedia notes: Raymonde de Laroche (August 22, 1882 – July 18, 1918), is thought to be the first woman to pilot a plane. She did become the world's first licensed female pilot on 8 March 1910. She received the 36th aeroplane pilot's licence issued by the Aeroclub de France, the world's first organization to issue pilot licences. At the time, pilot licences were only required for pilots operating aircraft for commercial purposes. In July 1910, de Laroche was participating in the week-long airshow at Reims in France. On 8 July, her aeroplane crashed, and she suffered such severe injuries that her recovery was in doubt, but two years later, she was fit again and had returned to flying.