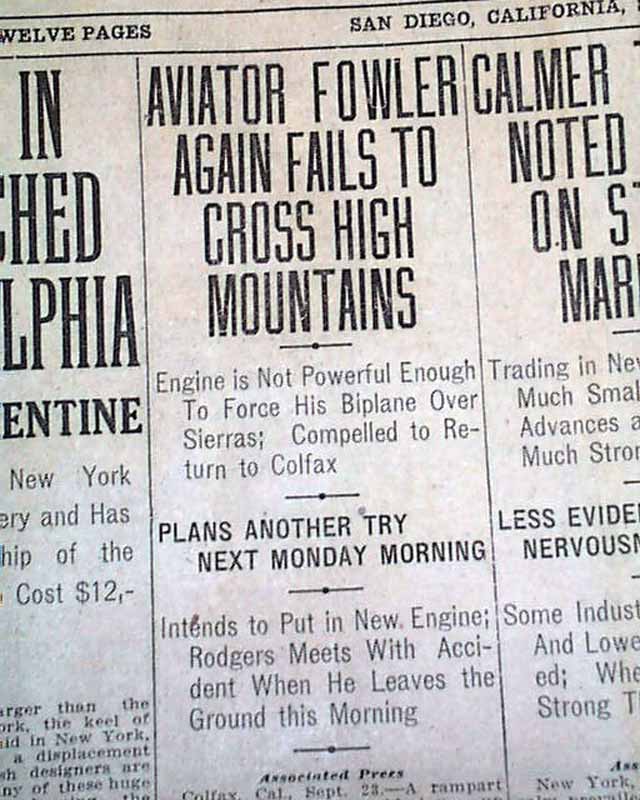 The top of the front page has a one column heading: "AVIATOR FOWLER AGAIN FAILS TO CROSS HIGH MOUNTAINS" with subheads. (see) Surprisingly this issue is in good condition being from the "wood pulp" era. Very hard to find issues that are not totally fragile from this era in paper.
Complete with 12 pages, small library stamps within the masthead, irregular along the spine, generally nice.

wikipedia notes: Robert George Fowler was an early aviation pioneer and was the first person to make a west-to-east transcontinental flight in stages. He left San Francisco, California on September 11, 1911 in an attempt to win the $50,000 (approximately $1,372,000 today) Hearst prize in a Wright biplane equipped with a Cole Motor Car Company engine. After his first day he crashed in Alta, San Diego County, California (not to be confused with Alta, Placer County, California).[4] His cross-country flight was completed February 8, 1912, in Jacksonville, Florida after the deadline, and the prize expired without a winner.