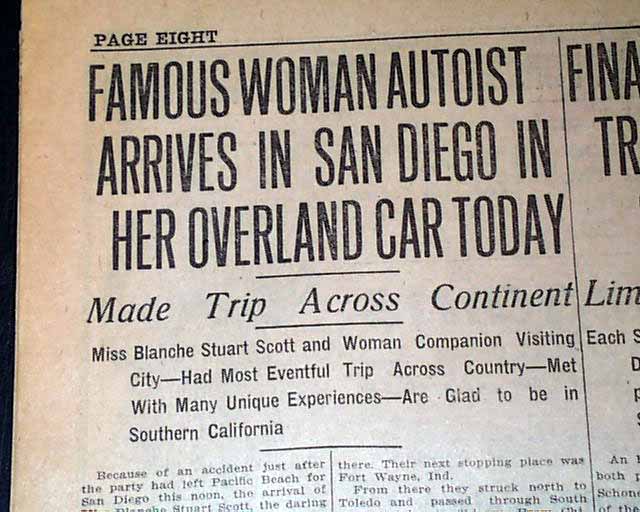 The top of page 8 has a two column headline: "FAMOUS WOMAN AUTOIST ARRIVES IN SAN DIEGO IN HER OVERLAND CAR TODAY" with subheads. (see) Surprisingly this issue is in good condition being from the "wood pulp" era. Very hard to find issues that are not totally fragile from this era in paper.
Complete with 10 pages, two small library stamps within the masthead, some small binding holes along the spine, generally nice.

wikipedia notes: Blanche Stuart Scott (April 8, 1884 – January 12, 1970), also known as Betty Scott, was possibly the first American woman aviator. In 1910 Scott became the second woman, after Alice Huyler Ramsey, to drive an automobile across the United States and the first driving westwards from New York City to San Francisco, California. The trip was sponsored by the Willys-Overland Company and the car was named the "Lady Overland". Scott and her passenger, a woman reporter called Gertrude Buffington Phillips, left New York on May 16, 1910, and reached San Francisco on July 23, 1910.