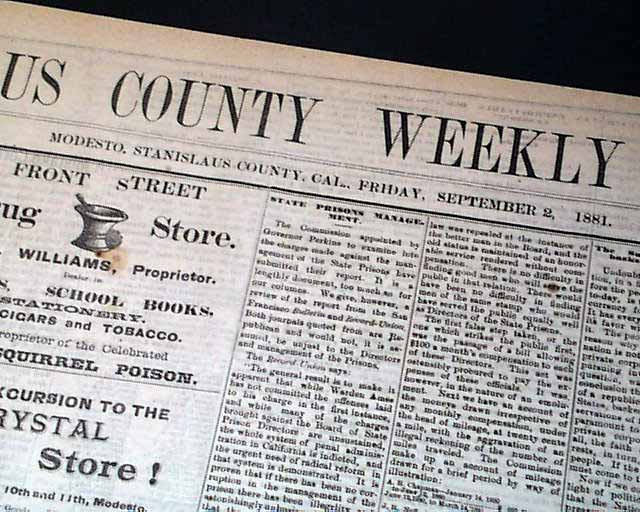 
STANISLAUS COUNTY WEEKLY NEWS, Modesto, California, Sept. 2, 1881  An early newspaper from this city in North-central California which when it began in 1868 was the first newspaper in Modesto. In 1881 the population of the town was less than 1000.
Various news events of the day, local, regional and national, with a wealth of advertising.
The back page has an interesting article taking over half a column: "Sketches of the Life of a Texas Ranger" being the notable John B. Jones, a member of the Texas Ranger Hall of Fame. Jones engaged in battle with the Comanche, the Kiowa and the Apache on several occasions, and his Frontier Battalion was instrumental in ending the Indian incursions and raids over the settlers' homesteads. His force also played a major role in pursuing and capturing many criminals and outlaws, such as noted bank robber Sam Bass in 1878.
Four pages, large folio size, very nice condition.