Home > Back to Search Results > From near the end of the Civil War...
Click image to enlarge 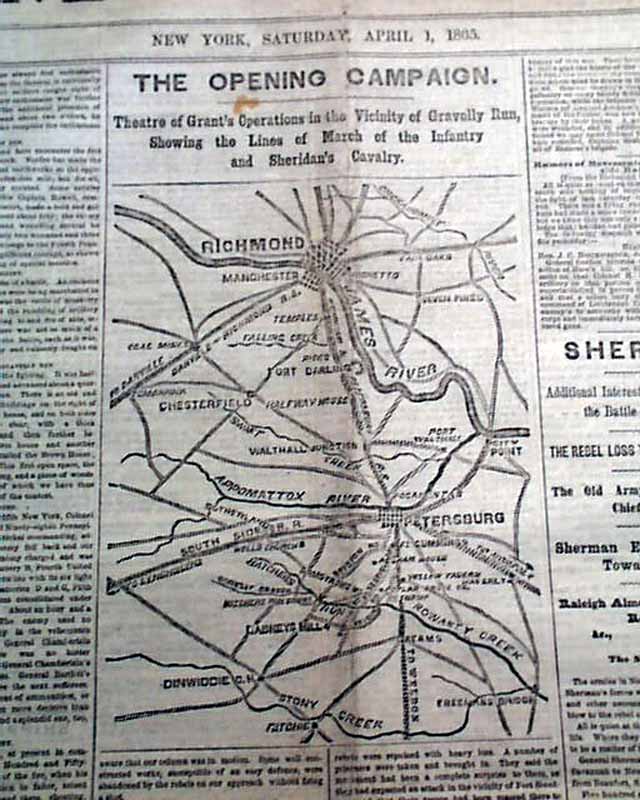 From near the end of the Civil War...

A fine issue on the closing days of the Civil War, featuring a front page a map of the Richmond & Petersburg vicinity headed: "THE OPENING CAMPAIGN. Theatre of Grant's Operations...".
Among the front page column heads are: "GRANT" "Advance Of The Army" "The Rebels Driven with Serious Loss" "General Sheridan at Dinwiddie Court House" "Heavy Firing in the Direction of Petersburg" "SHERMAN" "Additional Interest5ing Rebel Accounts of the Battle of Bentonsville" "The Rebel Loss 2500" "Sherman Expected to Move Towards Weldon" "THOMAS" "An Expedition Against Lynchburg" "Abandonment of North Georgia" "Dalton Evacuated & Burned" and much more.
Page 5 has another Civil War map headed: "The Attack On Mobile" with related column heads.
Eight pages, small binding slits at the spine, nice condition.