Home > Back to Search Results > 1904 Lynching of Paul Reed & Will Cato...
Click image to enlarge 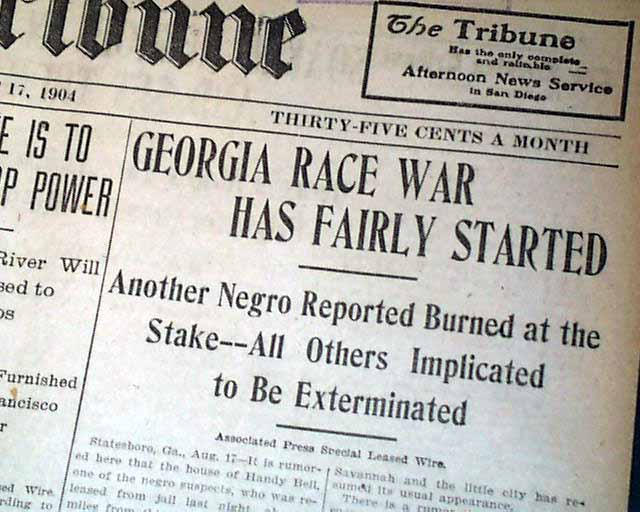 The top of the front page has a two column headline: "GEORGIA RACE WAR HAS FAIRLY STARTED" with subhead. (see) Surprisingly this issue is in good condition being from the "wood pulp" era. Very hard to find issues that are not totally fragile from this era in paper.
Complete with 6 pages, two small, lightly inked library stamps within the masthead, a little irregular along the spine, generally nice.

wikipedia notes: The lynching of Paul Reed and Will Cato occurred in Statesboro, Georgia on August 16, 1904. Five members of a white farm family, the Hodges, had been murdered and their house burned to hide the crime. Paul Reed and Will Cato, who were African-American, were tried and convicted for the murders. Despite militia having been brought in from Savannah to protect them, the two men were taken by a mob from the courthouse immediately after their trials, chained to a tree stump, and burned. In the immediate aftermath, four more African-Americans were shot, three of them dying, and others were flogged.