Home > Back to Search Results > 1908 Marianna, Pennsylvania mine disaster...
Click image to enlarge 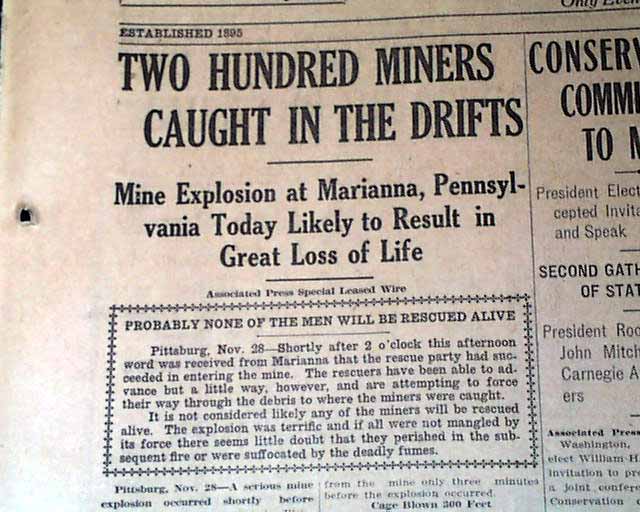 The top of the front page has a two column headline: "TWO HUNDRED MINERS CAUGHT IN THE DRAFTS" with subhead. Surprisingly this issue is in good condition being from the "wood pulp" era. Very hard to find issues that are not totally fragile from this era in paper.
Complete with 10 pages, two small library stamps within the masthead, some small binding holes long the spine, generally nice.

wikipedia notes: At 10:55 a.m. on the morning of Saturday, November 28, 1908, an explosion occurred in the mine which killed 154 men and left only one survivor. Although the mine was quickly refurbished by the Pittsburg Buffalo Company, the colliery's fortunes flagged. By 1914, the mine was sold to the Union Coal and Coke Company and later to Bethlehem Steel which continued to extract coal until 1988, when the main conveyor caught fire. The fire was extinguished, but the mine closed anyway.