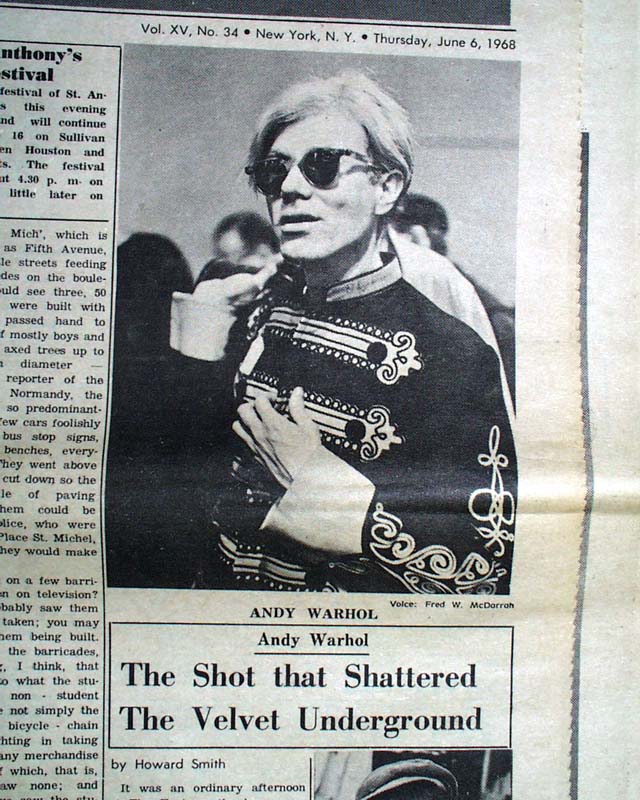 The feature article of this issue is regarding the shooting of Andy Warhol by Valarie Solanis: "The Shot that Shattered The Velvet Underground." Two related photos are present, and the coverage continues on an inside page.
In a bizarre twist of fate which is a bit stranger than fiction, Robert (Bobby) Kennedy died this same day at the hand of an assassin, and although the coverage was not included since this issue had already been printed, the back page has an eerie ad for help with his campaign which states: "ROBERT F. KENNEDY is alive and living in N.Y."
Also included is a cartoon by Pulitzer Prize winning author and satirical cartoonist Jules Feiffer.
Complete in 64 pages, never bound nor trimmed, tabloid-size, occasional margin-edge tears, a soft crease across the center (i.e., it has been folded at the centerfold - as is typical), very nice condition.
Provenance note: This issue comes from The Village Voice's own archives, part of their in-house collection used to create their digital archive.
Alert: Many issues of The Village Voice contain articles and/or photos which some consider offensive, and are certainly inappropriate for children. Please purchase with discretion.