Home > Back to Search Results > Very early issue from the Utah Territory...
Click image to enlarge 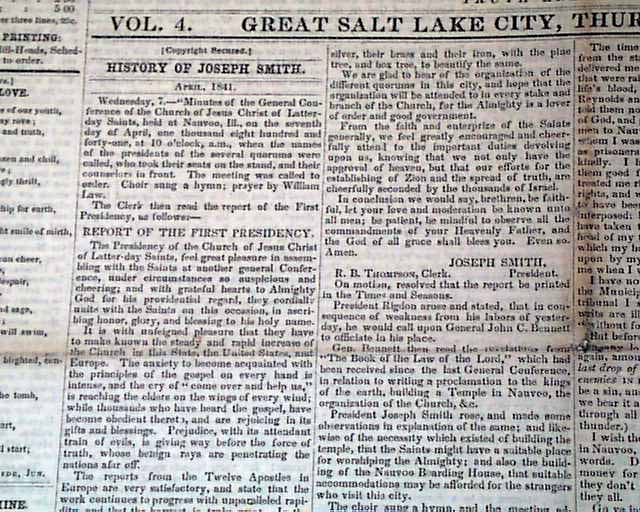 
DESERET NEWS, Great Salt Lake City, (Utah Territory), March 1, 1855  This title was the very first newspaper in the Utah Territory, having begun a bit over 4 years earlier. This is the volume 4, number 51 issue.
The ftpg. has part of a continued article headed: "History of Joseph Smith" which takes 1 1/2 columns, with a lengthy: "Report of the First Presidency" signed in type: Joseph Smith. This was from April, 1841.
Also on the ftpg. is a lengthier: "Address by President Joseph Smith, Delivered on the Evening of his Arrival from Dixon, June 30, 1843...Near the Temple, Nauvoo...". Then there is the: "Discourse By President Brigham Young, tabernacle, Feb. 18, 1855".
Page 3 has most of a column taken up with: "Prospect Of Mormon War" which includes: "...notice a strong disposition to get up an Anti-Slavery, Anti-Catholic, Anti-Nebraska, and last, but not least, Anti-Mormon excitement...If the design of those Anti-Mormon journalist is to subjugate and exterminate all mormons as such wherever located in the United States, it is well for Mormons to know timely about it..." with much more.
Great to have this report in a Mormon newspaper, as more typically we find such in other Eastern newspapers.
Not only a very early Mormon newspaper, but with fine content as well.
Four pages, never bound, minor rubbing to the top quadrant folds, generally nice condition.