Home > Back to Search Results > Problems in America... Mention of Dr. Franklin...
Click image to enlarge 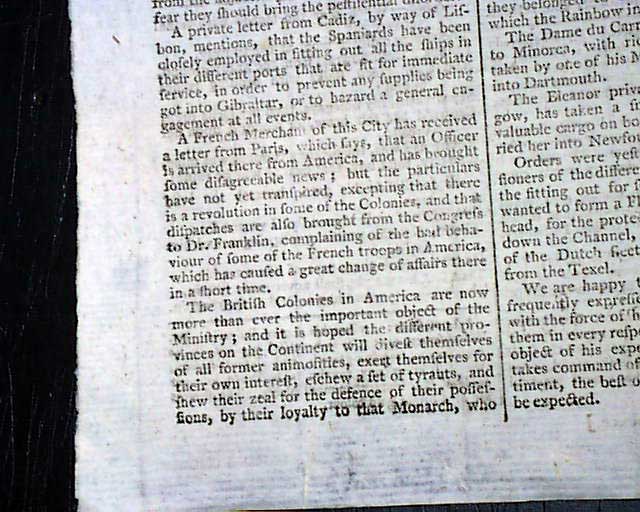 Pg. 2 has a bit noting: "...an officer is arrived there from America & has brought some disagreeable news...that there is a revolution in some of the colonies, & that dispatches are also brought from the Congress to Dr. Franklin complaining of the bad behaviour of some of the French troops in America..." and more. Then a letter includes: "...the Americans in general seem impatient for and expect a speedy peace with England; but he adds, I do not know an idea existing among them short of independence..." and more (see).
The bkpg. has an item: "...that every thing in the provinces of New Hampshire & Connecticut were in the greatest confusion, the inhabitants having refused to pay any more of the taxes that might be levied by Congress...The taxes on the people were intolerably grievous..." with more on this. Also: "It is said that General Lee, who has been for a considerable time in disgrace with Congress has contributed not a little to foment the disturbances which now prevail in New England..." with more.
Eight pages, 8 1/2 by 11 1/2 inches, nice condition.