Home > Back to Search Results > Very first use of the term "Bleeding Kansas"...
Click image to enlarge 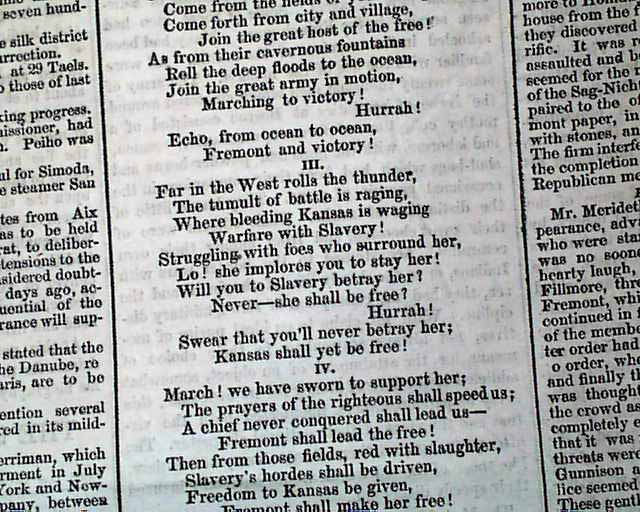 Very first use of the term "Bleeding Kansas"...

* Origin of the expression "Bleeding Kansas"

This issue contains a notable first mention of a term which would come to define the conflict within the country in the years just prior to the Civil War, and indeed, would help lead to the divide that would take another 9 years and tens of thousands of lost lives to resolve.
"Bleeding Kansas" was a series of violent civil confrontations in Kansas Territory between 1854 and 1859 which emerged from a political and ideological debate over the legality of slavery. At the heart of what often included bloody conflicts was the question of whether Kansas, upon gaining statehood, would allow slavery like neighboring Missouri, or prohibit it; that is, whether it would join the Union as a slave state or a free state.
The very first use of the term "Bleeding Kansas" was in a poem which appeared at the top of page 5 of this Horace Greeley newspaper, titled "Fremont & Victory" by Charles S. Weyman, part of the lyrics including:
"...Far in the West rolls the thunder—
The tumult of battle is raging
Where bleeding Kansas is waging
War against Slavery!...".
Great first mention of what has become a very notable term in American history.
Eight pages, archival strengthening at the margins, minor spine wear, generally good.