Home > Back to Search Results > Fine account of the battle of San Jacinto...
Click image to enlarge 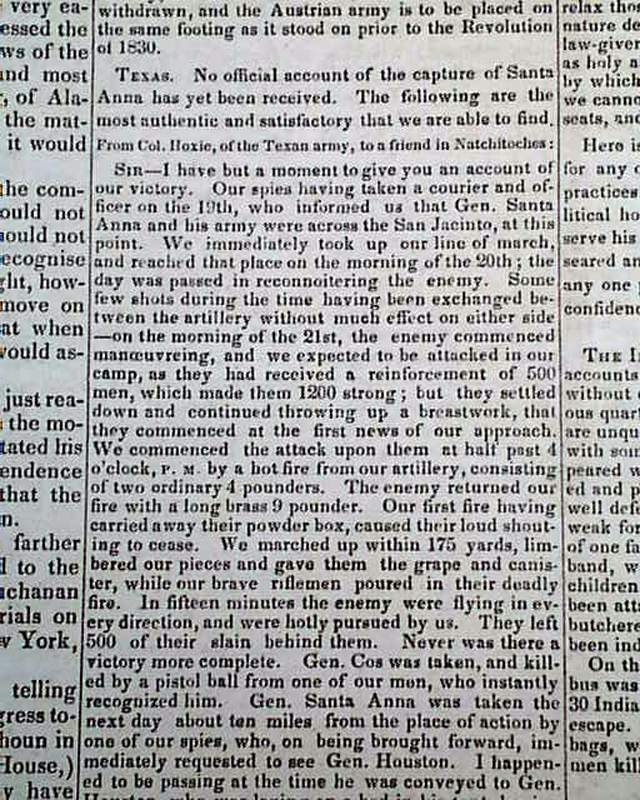 Page 3 has a lengthy report from Congress with one bit mentioning: "...member of the committee on Foreign Affairs, hoped it would not be sent there to be put to sleep. It should not be referred till we were prepared to recognize the independence of Texas...".
The next column has an account of the capture of Santa Anna and the battle of San Jacinto. A few bits include: "I have but a moment to give you an account of our victory...informed us that Gen. Santa Anna & his army were across the San Jacinto...the enemy commenced maneuvering & we expected to be attacked in our camp...We commenced the attack upon them...The enemy The enemy returned our fire...We marched up within 175 yards...They left 500 of their slain behind them. Never was there a victory more complete. Gen. Cos was taken & killed by a pistol ball...Gen. Santa Anna was taken the next day about ten miles from the place of action by one of our spies..." with more.
Four pages, archivally rejoined at the spine, foxing at the ftpg. folds, an older archival mend across page 2 is not close to the mentioned page 3 content.