Home > Back to Search Results > Great account of the last of the Lincoln-Douglas debates...
Click image to enlarge 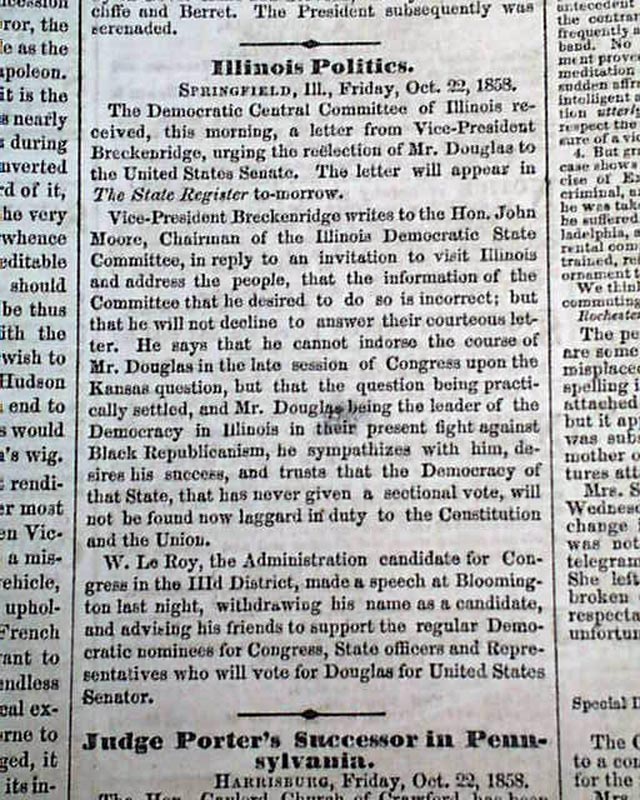 Great account of the last of the Lincoln-Douglas debates...

Keeping in mind that this was from the period of the Lincoln/Douglas debates, page 4 has a report from Springfield headed: "Illinois Politics" which talks of Stephen Douglas.
Taking over a full column is a fine report on the last of the famous Lincoln-Douglas debates, this one at Alton, Illinois.
A few excerpts from the report include: "The last great debate between Douglass and Lincoln took place today in our city...No political flags or mottoes were allowed...Douglass was speaking...His manner was excited and animating...the latter referring specially to every personal allusion of Mr. Lincoln, of which there are many, and some of them uttered in the insolent manner that characterizes the overseer of the negro plantation...Those cries and 'hurrahs for Douglas' were a serious interruption, and the Little Giant is cunning enough...The speech to-day was chiefly an attack upon Mr. Lincoln and the Republican Party, full of the grossest misrepresentations from beginning to end...At the close of Mr. Douglas's speech, which occupied an hour, Mr. Lincoln was introduced & received with music from a band and Chers...The Douglas papers had so belied him that we expected to see a man of most homely and awkward figure, or slow and hesitating speech...Imagine, then, the agreeable surprise when we say and heard the man. There stood before the multitude one of nature's nobleman, with a head & countenance expressive of the highest moral and mental qualities, a form tall & erect...a voice and articulation so clear and distinct that every word was heard to the farthest extreme...Mr. Lincoln's speech was an hour and a half. Mr. Douglas rejoining another half hour..." and much, much more.
Additionally, pages 4 & 5 have Mormon reports from Utah.
We find that reports on the now-famous Lincoln Douglas debates very difficult to find in newspapers outside of Illinois, perhaps not surprising because it was a senate race in Illinois and Lincoln was, at this time, still a relatively unknown figure in American politics. This is one of those very scarce issues.
Eight pages, archivally rejoined at the spine. Curiously, it appears as though this issue was bound into a volume backwards (we've seen this before), meaning bound at the right margin rather than the spine margin, as there are binding slits at the right margins. But save for some foxing the condition is quite nice and the Lincoln-Douglas report is unimpaired.