Home > Back to Search Results > The battle of San Jacinto...
Click image to enlarge 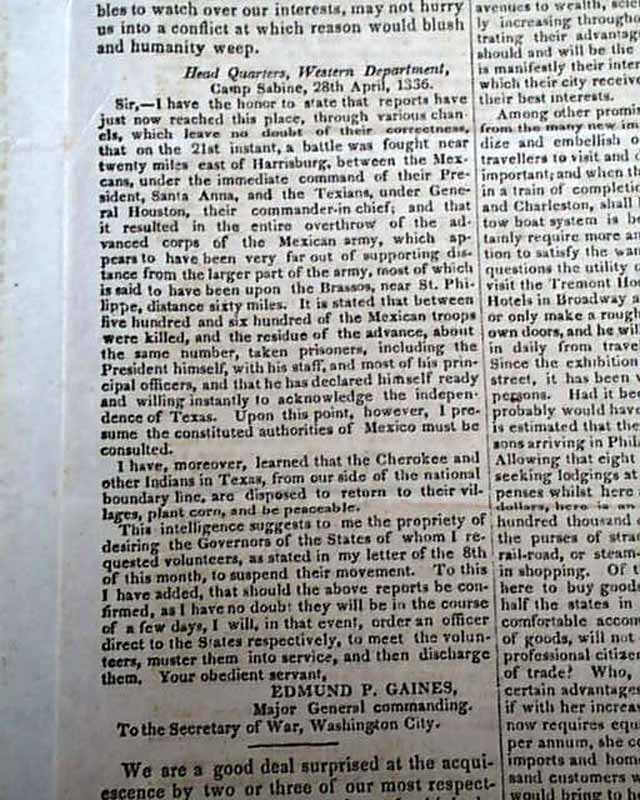 The battle of San Jacinto...

The front page has: "Important From Texas" which reports that the Mexicans, while being attacked by Gen. Houston, set fire to Harrisburg and retreated only to be overtaken by Houston resulting in a loss of 700 with 500 captured.
A letter from Sec. of War Rusk has particulars about the Battle at San Jacinto stating in part: "We met Santa Anna on the 21st inst...with 600 men.... we entirely routed his forces....Santa Anna and all of his...officers are our prisoners....we had only 6 killed and twenty wounded." More war details in other reports, with one stating that Santa Anna's saddle was taken.
The top of the first column also has an editorial report concerning the situation in Texas.
Page 2 is almost entirely taken up with various diplomatic exchanges between Forsythe and Lanzas on the Mexican situation. And page 3 has yet another report signed in type by Gen. Gaines about the battle of San Jacinto.
Great Texas content, four pages, never bound nor trimmed (desirable), several folds, nice condition.