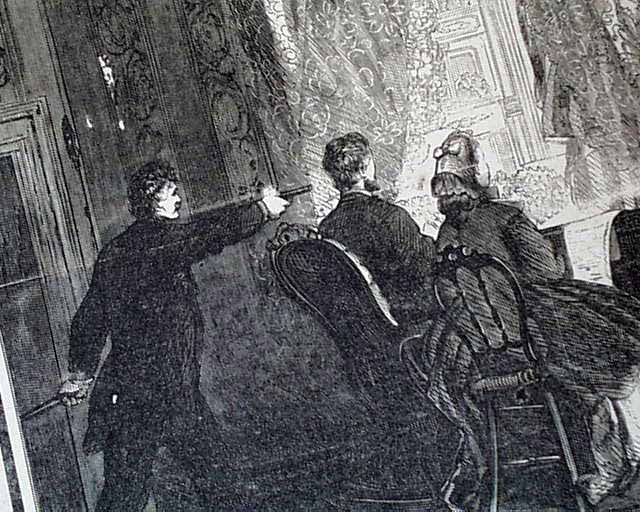 
FRANK LESLIE'S ILLUSTRATED NEWSPAPER, New York, Apr. 29, 1865  This issue remains one of the most desired for this historic, tragic event, as it is one of the only newspapers in the country which included a front page graphic showing the actual assassination of Abraham Lincoln.
Over half of the front page is taken up with a very dramatic print captioned: "Assassination of President Lincoln in His Private Box at Ford's Theatre, Washington, April 14" with front page text as well, headed: "The Martyr President".
The centerfold is another dramatic print captioned: "The Dying Moments of President Lincoln At Washington..." which is quite displayable.
The back page has a nice portrait captioned: "John Wilkes Booth, the supposed assassin of President Lincoln." Page 3 has an article: "The Murder of President Lincoln" with subhead: "The Deathbed of President Lincoln", as well as another article titled: "John Wilkes Booth" which begins: "This unhappy wretch, whose mad and wicked hand has struck down the foremost man in all the realm..." with a bit more.
Other prints include: "Escaped Slaves Arriving in Wilmington, N.C." "The Union Army Entering Richmond, Va--Reception of the Federal Troops in Main Street" "President Lincoln Visiting the Late Residence of Jefferson Davis in Richmond" "Scene in the Burnt District, Richmond..." and even more.
Complete in 16 pages, wear and various small tears at the blank spine, various foxing throughout, a few older tape repairs near inside page margins.