Home > Back to Search Results > Broadside issue reports that Hayes is the winner...
Click image to enlarge 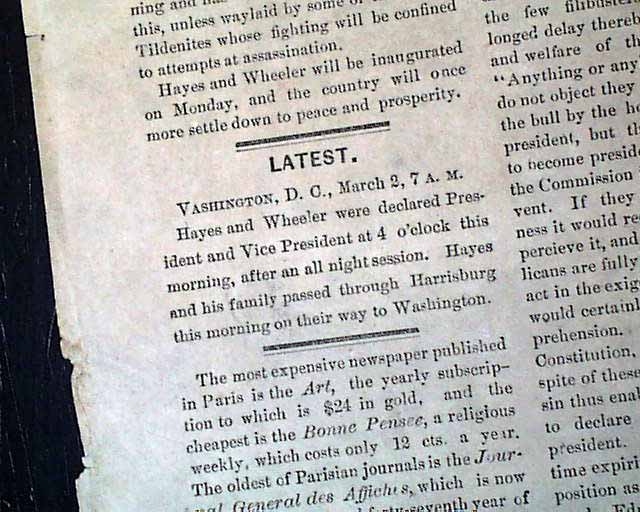 Broadside issue reports that Hayes is the winner...

A great broadside (printed on one side only) "Supplement" issue with over half of the issue taken up with the Presidential election of 1876.
It was one of the most contentious presidential elections in history and gave rise to the Compromise of 1877 by which the Democrats conceded the election to Hayes in return for an end to Reconstruction and the withdrawal of federal troops from the South. After a controversial post-election process, Hayes was declared the winner, even though Tilden had won the popular vote.
The first column has heads: "The Last State Reached & The Filibusters Beaten" "Hayes and Wheeler to be Inaugurated on Monday" "The Democrats Quarreling Among Themselves" "The Long Agony Over!" "That Same Old Coon Has The Tilden Rooster Down!".
Included is a great--and rare--graphic of the raccoon (apparently once a symbol of the Republican Party although I find no confirmation of it; more typically a symbol of the Whig Party) holding down the rooster, once a symbol of the Democratic Party.
The ftpg. has the: "Latest" report datelined from Washington, D.C., March 2, 7 a.m: "Hayes and Wheeler were declared President and Vice President at 4 o'clock this morning, after an all-night session..." and a bit more. A great same-day report.
Single sheet printed on the front only, 12 3/4 by 17 inches, minimal wear, generally nice condition.