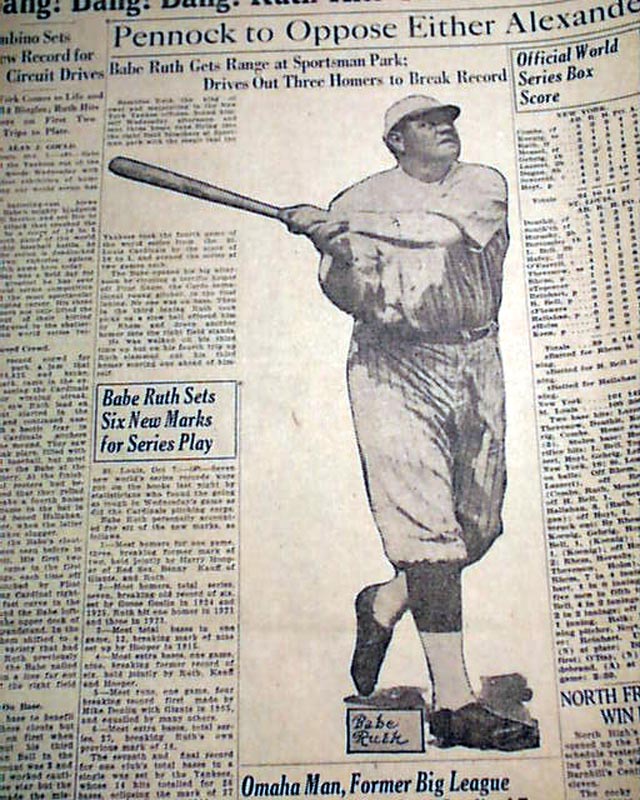 
THE OMAHA MORNING BEE, Nebraska, Oct. 7, 1926  In the annals of World Series history one of the outstanding events remains Babe Ruth hitting three home runs in the fourth game of the 1926 World Series. That event is reported in this issue.
The "teaser" article takes the entire last column of the front page: " 'Babe' Ruth Smacks Out 3 Home Runs" "Bambino of Swat Crowns Self With Glory in 10-5 Yank Victory Over Cardinals" "Records Go to Smash" with the article carrying over to page 9.
But page 8 is the best, with a banner headline: "Bang! Bang! Bang! Ruth Hits Three Homers and Yanks Head Cards, 10 to 5".
Subheads include: "Bambino Sets New Record for Circuit Drives" New York Comes to Life and Gets 14 Bingles; Ruth Hits Homers on First Two Trips to Platte" "Babe Ruth Sets Six New Marks for Series Play" and more, including the: "Official World Series Box Score."
But the best is the great, full-figure photo headed: "Babe Ruth Gets Range at Sportsman Park; Drives Out Three Homers to Break Record".
The complete issue, nice condition.