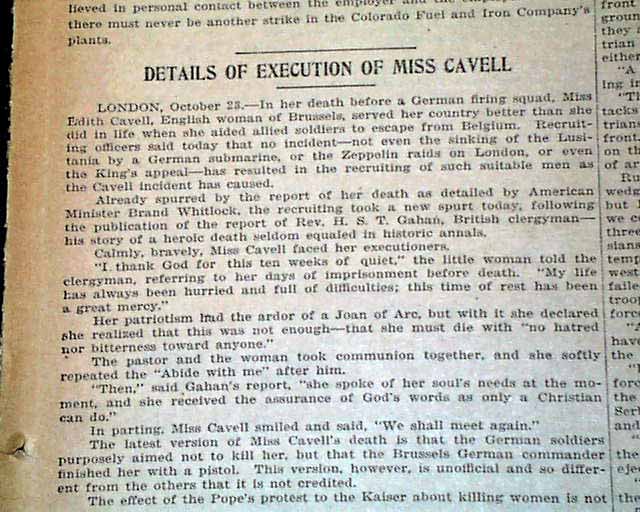 
STOCKTON DAILY RECORD, California, Oct. 23, 1915  The front page has a report headed: "Details of Execution of Miss Cavell".
Edith Cavell, a British nurse, was a notable figure from the early years of World War I. She is celebrated for saving the lives of soldiers from both sides without discrimination and for helping some 200 Allied soldiers escape from German-occupied Belgium during World War I, for which she was arrested.
She was accused of treason, found guilty by a court-martial and sentenced to death. Despite international pressure for mercy, she was shot by a German firing squad. Her execution received worldwide condemnation and extensive press coverage.

Also on the ftpg is: "Seeking top Run Down Robb Era" "American Troops Scouring Rio Grande Country" "United States Is Bound to Put a Stop to Border Raids Along the Rio Range", being a report concerning outlaw Pancho Villa.
Complete in 16 pages, very nice condition but a bit fragile and should be handled carefully.