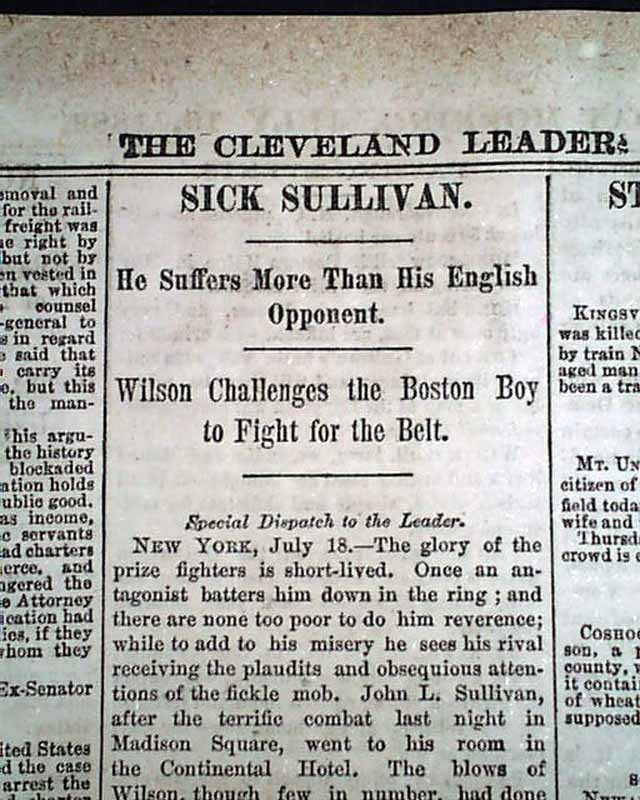 Page 3 has one column headings: "Sick Sullivan" "He Suffers More Than His English opponent" "Wilson Challenges the Boston Boy to Fight for the Belt" (see)
Complete with 8 pages, a little irregular along the spine, generally nice.

wikipedia notes: In 1882, Wilson was recruited by American newspaper publisher Richard Kyle Fox, who had been impressed with tales of Wilson's scientific skills from overseas, to take on world heavyweight champion John L. Sullivan. Wilson accepted the invitation and arrived in Philadelphia on June 21, 1882. Fox was stunned to find that Wilson was by this time a middle-aged, overweight has-been. Still, Wilson was matched with Sullivan on July 17, 1882 at Madison Square Garden. Promised $1,000 if he could make it through all four scheduled "exhibition" rounds, Wilson resorted to running, wrestling, and intentionally falling in order to get away from the champion. Though he made it the full distance and received his reward, he was roundly booed by the crowd and won Sullivan's eternal hatred.