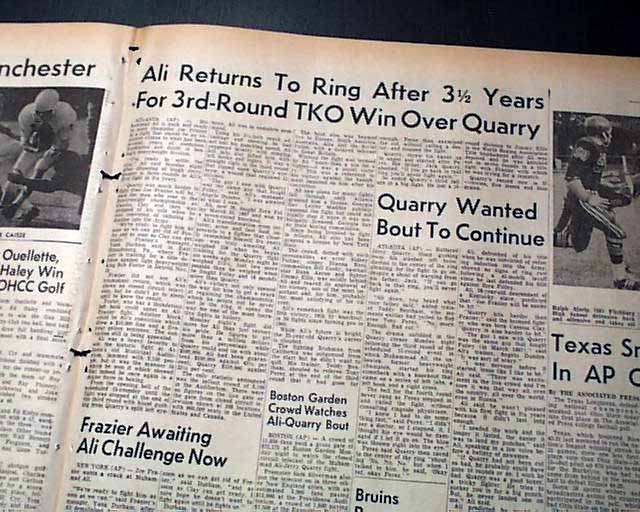 The top of page 7 has a five column headline: "Ali Returns To Ring After 3 1/2 Years For 3rd-Round TKO Win Over Quarry" and more.
Complete with 10 pages, light toning at the margins, some small binding slits along the spine, generally nice.

wikipedia notes: In March 1966, Ali refused to be inducted into the armed forces. He was systematically denied a boxing license in every state and stripped of his passport. As a result, he did not fight from March 1967 to October 1970—from ages 25 to almost 29—as his case worked its way through the appeals process before his conviction was overturned in 1971.
On August 11, 1970, with his case still in appeal, Ali was granted a license to box by the City of Atlanta Athletic Commission. Leroy Johnson, Jesse Hill Jr. and Harry Pett had used their local political influence and set up the company House of Sports to organize the fight, underlining the influence power of Georgia's black politics in Ali' s comeback. Ali's first return bout was against Jerry Quarry on October 26, resulting in a win after three rounds after Quarry was cut.