Home > Back to Search Results > The Wright brothers fly...
Click image to enlarge 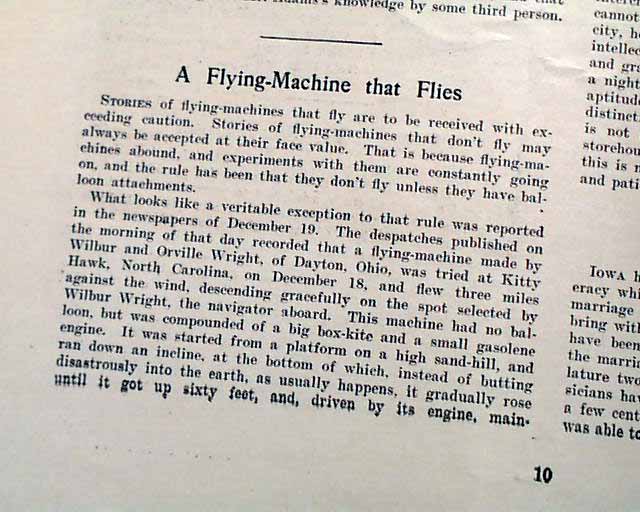 A very historic issue, as page 10 reports one of the more significant events of the 20th century with the heading: "A Flying Machine That Flies", reporting on the Wright brothers' successful flight at Kitty Hawk, North Carolina.
The beginning of the article tells the situation in an age when reports of manned flight were common, yet not true: "Stories of flying machines that fly are to be received with exceeding caution...What looks like a veritable exception to that rule was reported in the newspapers of December 19. The despatches published on the morning of that day recorded that a flying machine made by Wilbur and Orville Wright of Dayton, Ohio, was tried at Kitty Hawk, North Carolina, on December 18 and flew three miles against the wind, descending gracefully on the spot selected by Wilbur Wright, the navigator aboard..." with more.
This article takes about 6 column inches. Reports on the Wright brothers' first flight were almost universally given limited press as accounts of manned flight were rampant and usually unreliable.
Complete in 34 pages, disbound, 9 1/4 by 13 1/4 inches, nice condition.