Home > Back to Search Results > Washington's letter to the Hebrew Congregation in Savannah...
Click image to enlarge 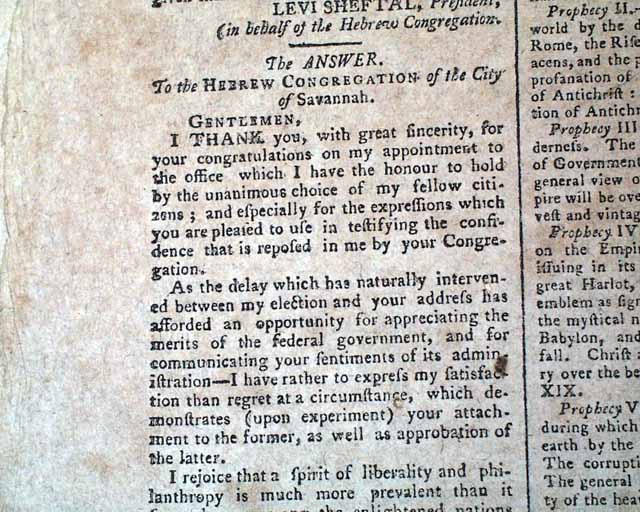 Washington's letter to the Hebrew Congregation in Savannah...


MASSACHUSETTS SPY OR THE WORCESTER GAZETTE, Worcester, Massachusetts, July 1, 1790 This is a very significant newspaper.  The first column on the back page (page 4) contains the: "Address from the Hebrew Congregation of the city of Savannah, in Georgia, to the President of the United States" signed in type by: Levi Sheftal, President, in behalf of the Hebrew Congregation. This was a congratulatory letter on Washington assuming the Presidency, and was the first ever such congratulatory letter by a Hebrew Congregation.
Following this is the response of the President headed: "The Answer to the Hebrew Congregation of the City of Savannah" which is signed by him in type: G. Washington. Near the end of this letter is: "May the same wonder working Diety, who, long since delivering the Hebrews from their Egyptian oppressors, planted them in the promised land--whose providential agency has lately been conspicuous in establishing these United States as an Independent Nation--still continue to water them with the dews of Heaven & to make the inhabitants of every denomination participate in the temporal and spiritual blessings of that people, whose God is Jehovah!"
A very desired Judaica item as such and rarely offered.
The balance of this issue has some fine content as well, including a back page Act of Congress which is signed in italic type by: George Washington, and in block type by John Adams and Thomas Jefferson.
The front page contains the: "Codicil to Dr. Franklin's Will" which takes over a full column & is concluded in a future issue.
Pg. 2 contains the: "Address of the House of Representatives to his Excellency John Hancock, Gov. of the Commonwealth of Massachusetts." Other news & ads as well.
Complete in 4 pages, never-trimmed margins, damp staining.

Note: a 3 by 4 1/2 inch piece from a corner of the back leaf (immediately above but not touching the Judaica item) was cut away but has been reproduced from another of this identical issue, printed on period paper, and laid in to restore the issue to completeness (see photos).
The Sotheby sale of December 4, 2014 sold another of this issue (unrepaired) for $68,750.