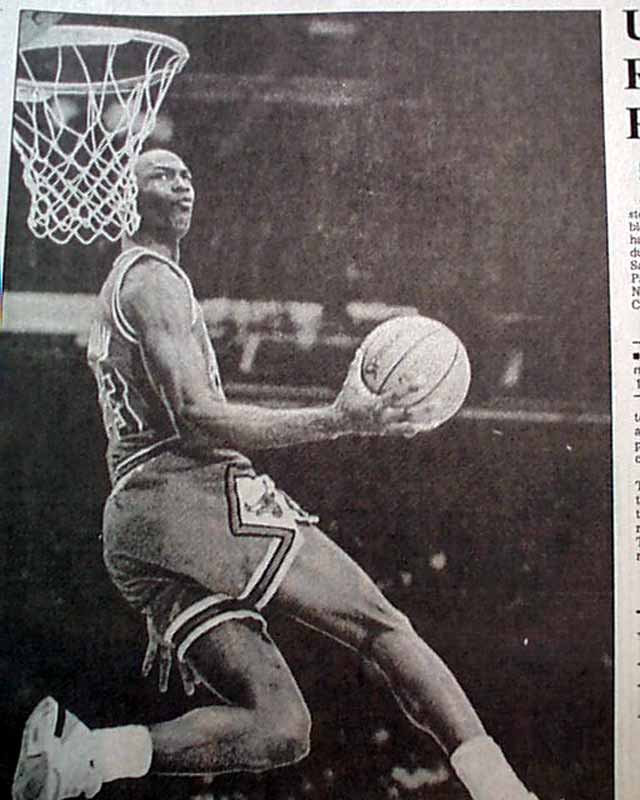 The front page of the sport's section has a one of Jordan's iconic photos showing him in action in the 1988 slam dunk contest which was held at Chicago Stadium. The top of page 4 of this section has a banner heading: "Jordan Wins Dunk Contest, but it's Judges Who Get Slammed" (see)
Complete 1st and sport's sections only with a total of 60 pages, very nice condition.

wikipedia notes: Chicago's Michael Jordan won back-to-back dunk contest victories in 1987 and in 1988. His victory over Wilkins in 1988 in Chicago finished with a perfect 50 dunk from the free-throw line for his third dunk to win the contest. However, the announcers did note that Wilkins was given abnormally low score for his breathtaking third dunk, a 45, allowing Jordan to win it by 2 with his perfect 50. To this day, the allegations of "home cooking" still float around surrounding the event (it was held on Jordan's home court; one of the judges was former Chicago Bears star Gale Sayers; and another judge, former NBA star Tom Hawkins, is a Chicago native) and until the competition in 2020, was considered arguably the most controversial of the slam dunk competitions. Extensive debate continues whether Wilkins 3rd dunk should have scored higher than a 45 and whether Jordan's second dunk, which scored a 47, was a superior creative effort to Wilkins third dunk.