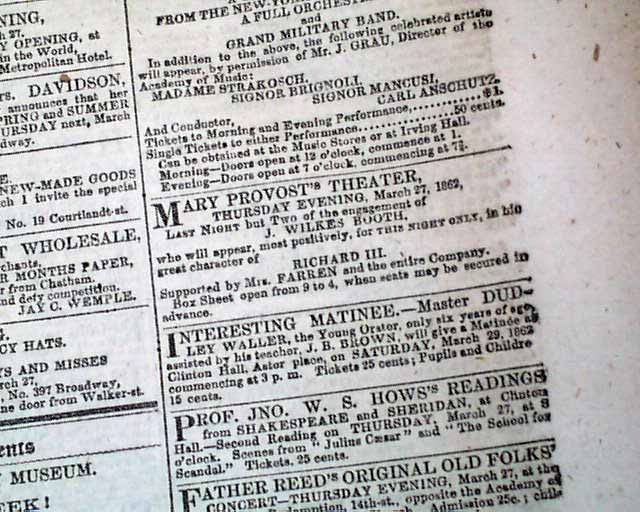 
NEW YORK TRIBUNE, March 27, 1862  Near the top of the front page contains one of the fascinating tidbits of history which delight collectors, in this case an inconspicuous advertisement for a theatrical production of The Apostate at the Mary Provost Theater in New York--starring John Wilkes Booth.
See the photo for the complete ad which notes the listing of the cast, including: "Last Night, but two of the engagement the young American Tragedian, J. WILKES BOOTH, who will...for this night only...character of Richard III..." with just a bit more. It's always terrific to find reports of notables in history--both famous and infamous--before they would become more widely known to the world.
Although there are many Civil War reports within these 8 pages, including a small, one column map on the back page: "The Siege of Island No. 10" with more, this tiny ad is a treasure which trumps the war news.
Eight pages, never-trimmed margins, very nice condition.