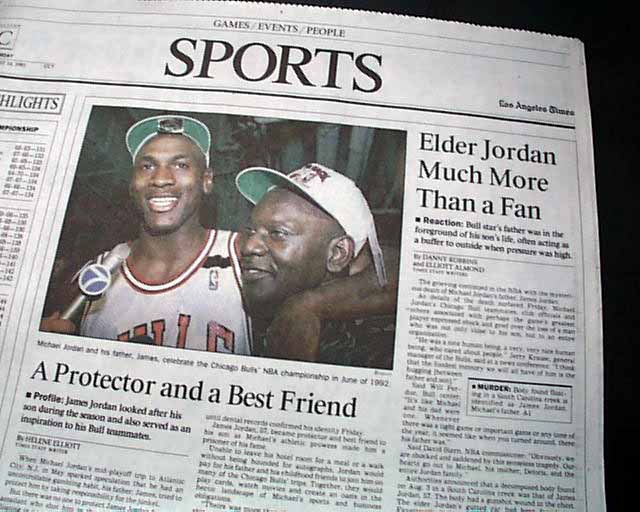 wikipedia notes: On July 23, 1993, while returning home from a funeral, Jordan Sr. pulled over on US Highway 74 just south of Lumberton, North Carolina, to take a nap. Daniel Andre Green and Larry Martin Demery spotted the car Michael had recently purchased for him (a red Lexus SC400 with the North Carolina license plate that read "UNC0023"). Green and Demery shot Jordan to death while he slept in his car and then stole the vehicle. His body was found on August 3 in a swamp in McColl, South Carolina. As his body was in a state of extreme decomposition, Jordan Sr. was not identified until August 13 with the help of dental records provided by the family dentist. (His body had previously been cremated by the coroner due to lack of storage space, but his jaw and hands were preserved for identification.)
After going through Jordan Sr.'s belongings, Green and Demery realized that Jordan Sr. was the father of Michael Jordan. They had taken other items from the car, including two NBA championship rings given to Jordan Sr. by his son. Green and Demery made several calls from Jordan Sr.'s cell phone and as a result were immediately captured. After their arrest, Demery said that they had planned only to tie up their victim and that Green pulled the trigger for no reason.