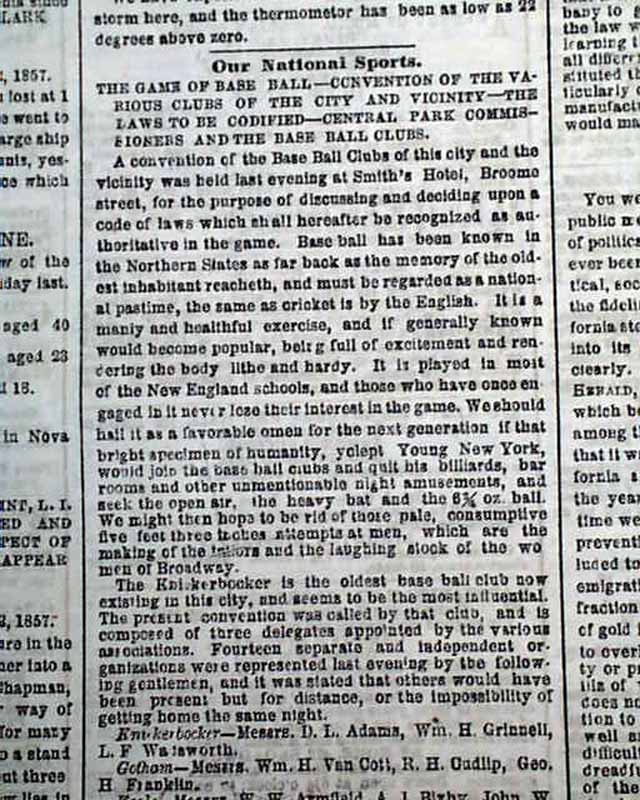 
THE NEW YORK HERALD, January 23, 1857  The back page has a report which could be considered the birth of organized baseball. And printed the day after the event happened.
The second column has an article headed: "Our National Sports" with subheads: "The Game of Base Ball--Convention of the Various Clubs Of the City and Vicinity--The Laws to Be Codified--Central Park Commissioners & the Base Ball Clubs".
Over half of the column is taken up with the report of the historic January 22, 1857 convention of baseball teams. Its significance is noted by none other than John Thorn, the official Historian for Major League Baseball.
The article begins: "A convention of the Base Ball Clubs of this city & the vicinity was held last evening at Smith's Hotel, Broome street, for the purpose of discussing & deciding upon a code of laws which shall hereafter be recognized as authoritative in the game. Base ball...must be regarded as a national pastime, the same as cricket is by the English. It is a manly & healthful exercise and if generally known would become popular..." with further particulars of the convention, noting that since the Knickerbocker club is the oldest club in the city, it would be the most influential.
Included is a list of the various baseball clubs, and their representatives, at the convention. One of the decision was to agree to: "...the motion that a a committee of five be appointed to prepare a code of laws which shall be authoritative on the game..." with further commends including a list of the men in the committee. Also that: "...Mr. Armfield moved that an assessment of $2 be made from each club in order to defray incidental expenses..." and comments on 3 different sizes/weights of ball that: "...the Convention will eventually be called upon to decide which is orthodox of the trio...". Also talk of a committee to consider Central Park as the location for the baseball games.
The article has a terrific ending, noting: "Base ball is about becoming a great national institution. The gentlemen assembled last evening at Smith's Hotel were engaged in a work not of that trifling importance which a casual observer might suppose...Let us have base ball clubs organized by the spring all over the country, rivaling in their beneficent effects the games of Roman and Grecian republics. Schoolmasters and clergymen, end a helping hand."
A seminal report in this history of baseball.
Eight pages, archivally strengthened at the spine, various archival mends in the issue do not affect the mentioned report, generally nice and very clean condition.
Slightly fragile so it should be handled carefully.