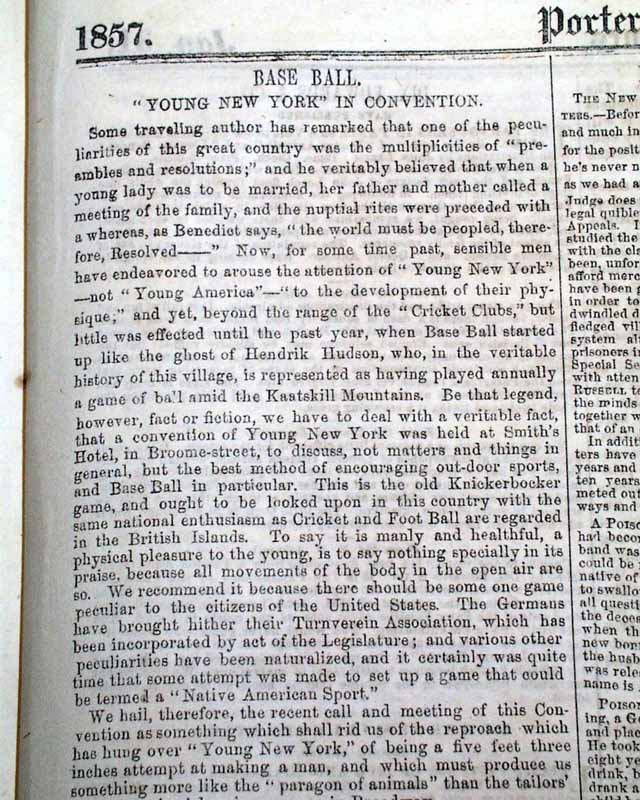 
PORTER'S SPIRIT OF THE TIMES, New York, January 31, 1857  A rather famous sporting newspaper, with a sporting-themed masthead, calling itself: "A Chronicle of the Turf, Field Sports, Literature and the Stage". This is the vol. 1 number 11 issue.
The page 13 report could be considered the birth of organized baseball. The top of the first column is headed: "BASE BALL - Young New York In Convention". The entire column is taken up with the report of the historic January 22, 1857 convention of baseball teams. Its significance is noted by none other than John Thorn, the official Historian for Major League Baseball.
A few bits include: "...that a convention of Young New York was held at Smith's Hotel in Broome street, to discuss...the best method of encouraging out-door sports, and Base Ball in particular...This is the old Knickerbocker game & ought to be looked upon in this country with the same national enthusiasm as Cricket and Foot Ball are regarded in the British Islands...We had...the recent call & meeting of this Convention...we proceed to the business part of the meeting, which was taken in hand by the Knickerbocker Club, as the oldest association in the city, & the other clubs were represented as follows:..." and what follows is the list of teams present & their representatives.
One of the decision was to agree to: "...the motion that a committee of five be appointed to prepare a code of laws which shall be authoritative on the game..." with further commends including a list of the men in the committee. Also that: "...Mr. Armfield moved that an assessment of $2 be made from each club in order to defray incidental expenses..." and comments on three different sizes/weights of ball that: "...the Convention will eventually be called upon to decide which is orthodox of the trio...". Also talk of a committee to consider Central Park as the location for the baseball games.
A seminal report in this history of baseball. A later issue of this newspaper would print the rules which were agreed to, the catalyst being this very convention.