Home > Back to Search Results > Rare mention of Kit Carson in the Civil War...
Click image to enlarge 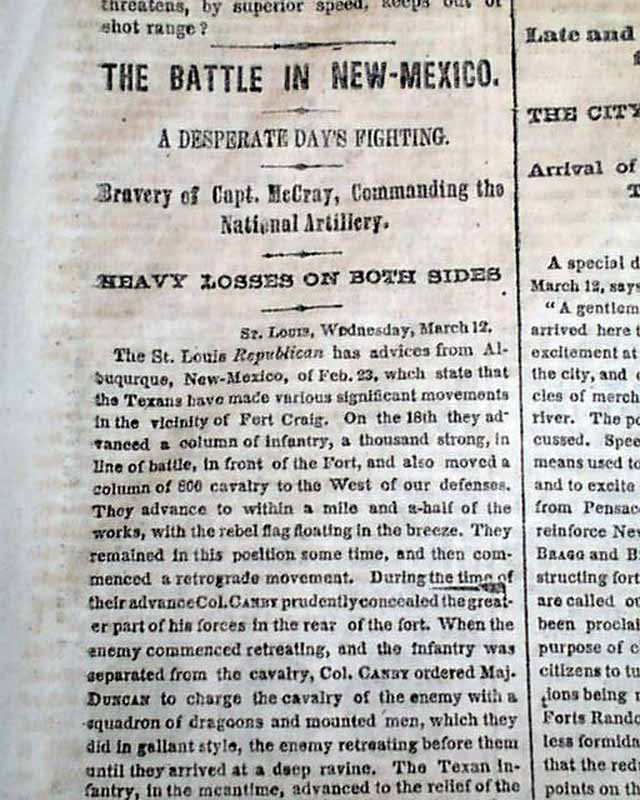 Rare mention of Kit Carson in the Civil War...

The front page has much reporting on the Civil War including one column heads: "The "Advance of the Army" "Latest Intelligence from the Vicinity of Manassas" "Rebels Expected to Make a Stand at Gordonsville" "Gen. McClellan & His Army" and more.
Page 5 has: "The Battle In New Mexico--A Desperate Day's Fighting" which takes 3/4 of a column & includes: "Kit Carson was in command of a regiment of volunteers who were deployed as skirmishers. His command did good service during the action, and behaved well."
More war coverage continues on the back page with: "The Evacuation of Winchester" "The Great Naval Victory" "Rebel Official & Unofficial Reports of the Naval Battle in Hampton Roads" "Jeff Davis' Message on Floyd" which is signed by him in type: Jefferson Davis; and "The Battle of Pea Ridge".
Eight pages, very nice condition.