Home > Back to Search Results > First advertisement for a radio...
Click image to enlarge 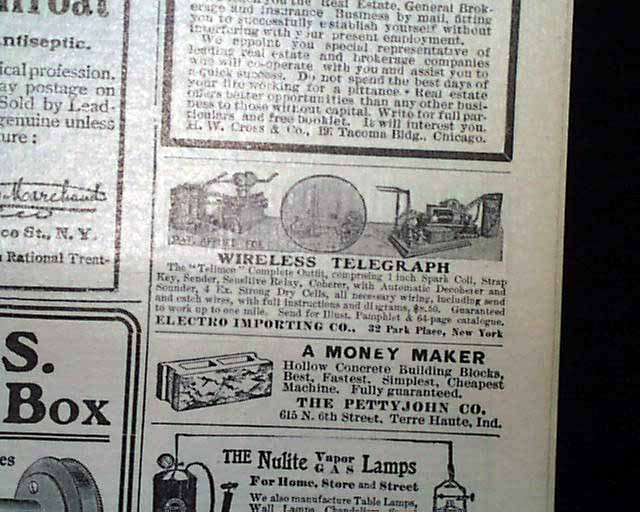 First advertisement for a radio...


SCIENTIFIC AMERICAN, New York, Nov. 25, 1905  This issue is desired for containing the first advertisement for a radio for sale. Although inconspicuously located near the back of the issue, it is a landmark item for any early radio collectors.
This advertisement for the Electro Importing Company's new radio transmitting-and-receiving package, the "Telimco Wireless Telegraph Outfit", "Guaranteed to work up to one mile", first appeared in this very issue and then began running weekly starting two weeks later.
The Telimco system included a battery-operated spark transmitter plus a tapping-coherer receiver, also battery operated. The use of a spark transmitter and tapping-coherer receiver meant it could only be used to send and receive telegraphic dots-and-dashes, and not full audio.
This ad measures 2-1/4 by 1-1/8 inches.
It was later reported that some were so suspicious whether the Telimco Outfits could really be sold so cheaply that the New York City police department investigated to make sure the ads were not really a scam (credit: EarlyRadioHistory.us).
Complete in 20 pages, small library stamp at the top, very nice condition.