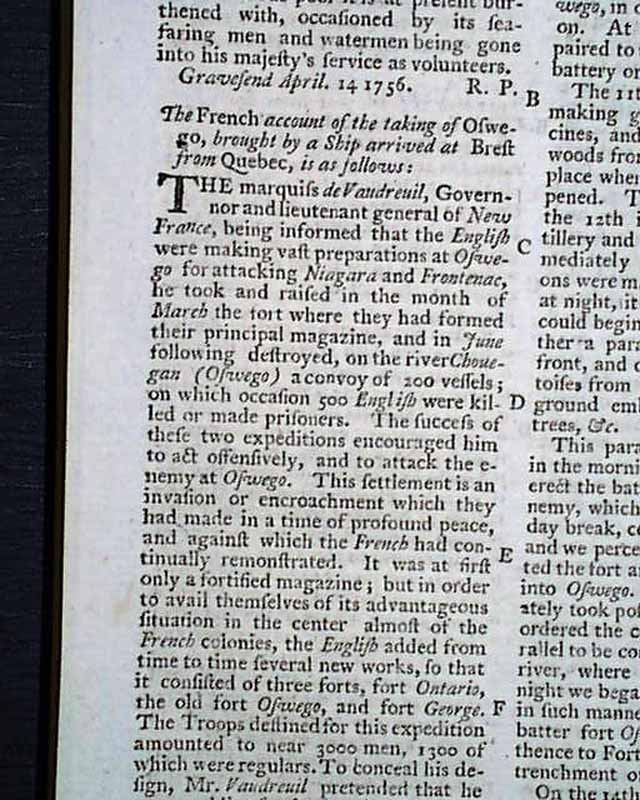 GENTLEMAN'S MAGAZINE, London, November, 1756  Content includes: "The French Account of the Taking of Oswego" which has over a full page of text with some great, detailed reporting of the battle. Historically very significant with a few points reading, "...on the 14th a body of Canadeans and savages crossed the river...in order to invest & attack the fort on the side of the woods...this bold action...forced the enemy to hang out a white flag....By Virtue of the capitulation the garrison surrendered prisoners of war and the French immediately took possession of Oswego and fort George, which they entirely destroyed...", and more. Report includes several mentions of Montcalm.
Other items in this issue include: "Monstrous Sheep Described" "An American Wasp Nest Described" which includes an illustration of it; and so much more. Near the back is the "Historical Chronicle" which has the latest news reports of the day, one bit noting: "We have seen our colonies in America abandoned in a manner to the ravages of the enemy. They have either been unassisted from hence, or, what is worse, they have had only insufficient succours under improper & injudicious leaders who have fallen victims to their own inexperience & temerity."
Lacking the map called for.
Complete in 48 pages, 5 by 8 inches, full title/contents page featuring an engraving of St. John's Gate, nice condition.