Home > Back to Search Results > With the famous quote: "We have met the enemy and they are ours..."
Click image to enlarge 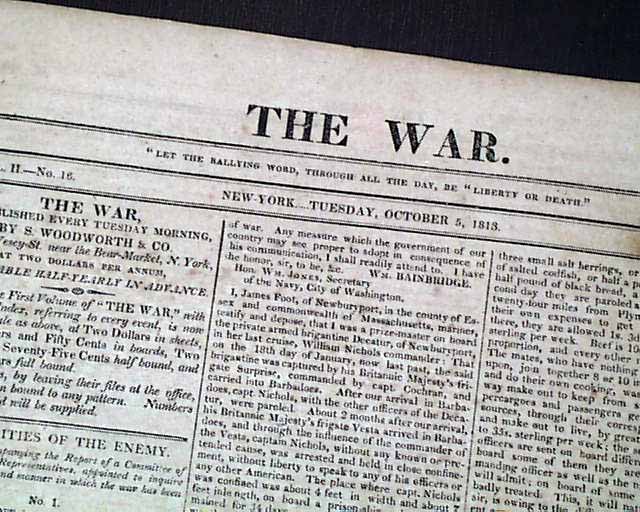 With the famous quote: "We have met the enemy and they are ours..."

This is a very interesting newspaper as it existed for one purpose: to report the news from the War of 1812. It began publication shortly after the war began, & ceased to publish once the war was over.
The ftpg. is entirely taken up with a lengthy & detailed report headed: "Barbarities Of The Enemy" "Bad Treatment Of American Prisoners By the British" which includes several signed reports. The report carries over to pg. 2 & is continued in a future issue.
Pages 2 & 3 are filled with various War of 1812 reports including items headed: "Naval Dinners" "Dreadful Conflict" "Dinner of the Brave Tars" "Further Of the Victory on Erie" which includes the very famous & historic dispatch signed in type: O. H. Perry and which begins: "We have met the enemy--and they are ours....", certainly one of the more famous utterances in this history of America. Terrific to have this quote in a period newspaper, and a military newspaper at that! The report on the battle of Lake Erie is reported on page 3 as well headed: "Further Particulars of Commodore Perry's Victory". Other pg. 3 items include: "Canadian News" "and "Our Triumphs". The back page has "Arrival of Commodore Rodgers!" among other items.
Complete in 4 pages, measures 9 1/2 by 11 1/2 inches, in very nice and clean condition.