Home > Back to Search Results > On their way to the Battle of Gettysburg...
Click image to enlarge 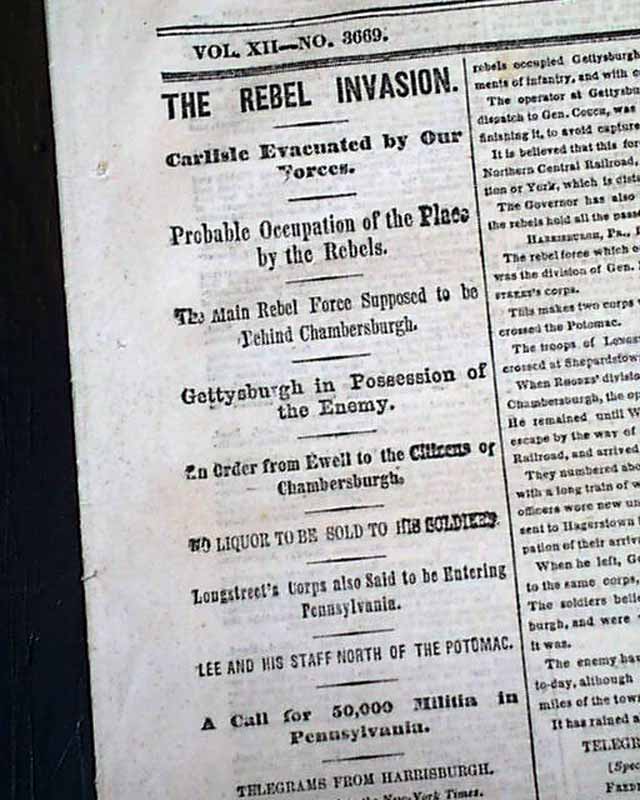 On their way to the Battle of Gettysburg...

* Confederates advancing upon Gettysburg for the historic battle

The front page has some nice & detailed reporting on the advance of the Confederates into the North, with first column heads including: "THE REBEL INVASION" "Carlisle Evacuated by Our Forces" "Probable Occupation of the Place by the Rebels" "The Main Rebel Force Supposed to be Behind Chambersburg" "Gettysburg in Possession of the Enemy" "An Order from Ewell to the Citizens of Chambersburg" "No Liquor to be Sold to His Soldiers" "Longstreet's Corps also Said to be Entering Pennsylvania" "Lee and His Staff North of the Potomac" "A Call for 50,000 Militia in Pennsylvania".
There are other Civil War headlines on the front page, the inside pages, and the back page as well. The back page heads include: "The Rebels In Pennsylvania" "Stirring Proclamation from Gov. Curtin" "50,000 Militia Called For"
Eight pages, never bound nor trimmed, minor loss to a portion of the blank margins in back two leaves, nice condition.