Home > Back to Search Results > Churchill's famous "never give in" speech...
Click image to enlarge 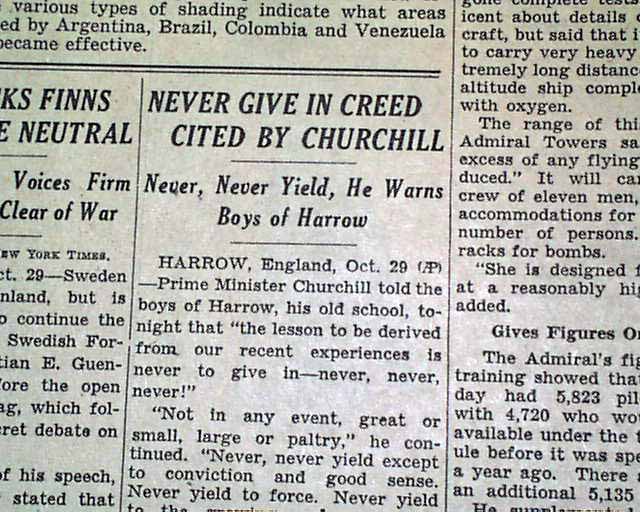 Churchill's famous "never give in" speech...

Page 4 contains one of the most famous speeches of World War II, certainly among the top speeches by British Prime Minister, Winston Churchill.
On October 29 Churchill visited his former school at Harrow and gave his "never give in" speech, very timely given the bombing of England by Germany at the time. The speech is not given here in full but rather the highlights are cited, text including: "...the lesson to be derived from our recent experiences is never to given in--never, never, never!" Not in any event, great or small, large or paltry...Never, never yield except to conviction and good sense. Never yield to force..." and more.
Although many refer to this as his "never give up" speech, in fact he never mentioned that phrase. I suspect this is one of the few publications to report this particular event as other titles in our inventory do not.
Complete in 48 pages, light toning at the margins, nice condition.