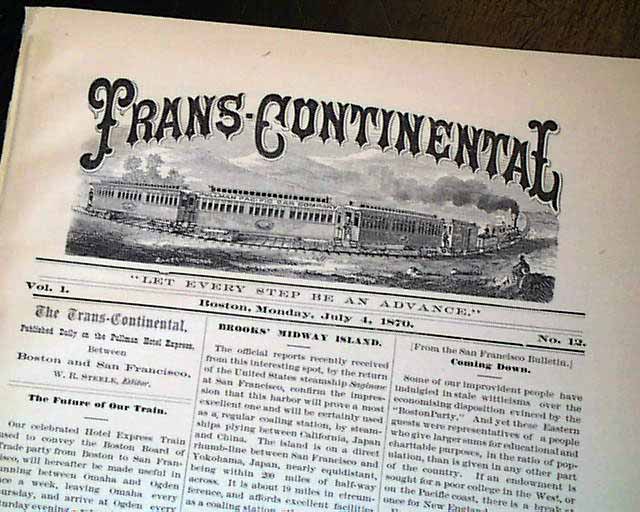 
TRANS-CONTINENTAL, Boston, July 4, 1870  This is a very fascinating newspaper, borne in the ingenious mind of a publisher who decided to take a small printing press on board the first transcontinental railroad excursion and publish 6 issues westbound and 6 issues eastbound.  Printed on a Gordon press in the baggage car, it is considered the very first newspaper composed, printed, & published on a train.
This is issue number 12, published at Boston, the last issue published. Each issue recorded the process of the journey with the sights and events along the way. Each issue carries the dateline of a different city: Niagara Falls, Omaha, Cheyenne, Ogden, Utah; Salt Lake City, Utah; Summit Sierra Nevadas, San Francisco, Promontory Point, Utah; Laramie, Wyoming; Grand Island Nebraska; Burlington, Iowa; and Boston.
Half of page 2 is taken up with the "Valedictory" in which the editor reflects upon the excursion, noting in part: "At six o'clock...July second the Pullman Palace Train was run into the city of Boston, and there ended probably the grandest pleasure excursion ever undertaken. Just six weeks before the same train had entered the city...In the meanwhile it has twice crossed the continent of North American...All agree that the excursion has been a splendid success..." with much more.
A fine opportunity for a very rare title. Four pages, 7 by 9 3/4 inches, great condition. Included with this issue is a reprint set of all 12 issues published. See our item 662918 for details.

One of the less common titles of the ...