Home > Back to Search Results > News from America on King George's War....
Click image to enlarge 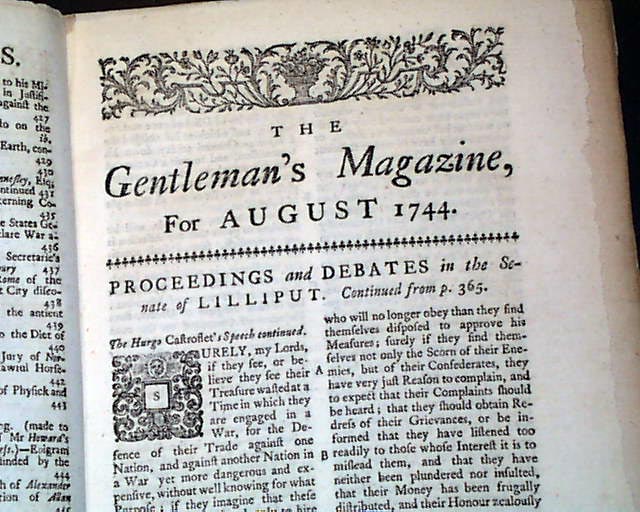 Over 9 pages at the beginning of the issue are taken up with reports on events in Parliament under the guise of: "Proceedings & Debates in the Senate of Lilliput" as direct reporting on Parliamentary events was prohibited.
Among various other articles found in this issue are: "Bill for Speedy Manning the Fleet" which takes 7 pages; "On Writing History, by M. Voltaire";  a continued list of: "Ships Taken from the French by the English" "The Queen of Hungary's Army in order of Battle" is a chart; "The King of Prussia's Manifesto" "Mr. Yate's new Theory of the Earth" "Hypothesis Concerning Comet's Tails examined" "On the Present State, etc. of Physic and Surgery" and much more.
Near the back is the "Historical Chronicle" which has various news reports from throughout Europe. Included also is a report from St. Kitt's in the Caribbean, also one headed: "Extract of a Letter from Jamaica".
There is also a lengthy report datelined: "Boston in New England" which takes most of a column & includes reports from King George's War, part of the War of Austrian Succession.
There are no maps or plates called for in this issue.
Complete in 56 pages, 5 3/4 by 8 3/4 inches, wide never-trimmed margins, full title/contents page featuring an engraving of St. John's Gate, great condition.