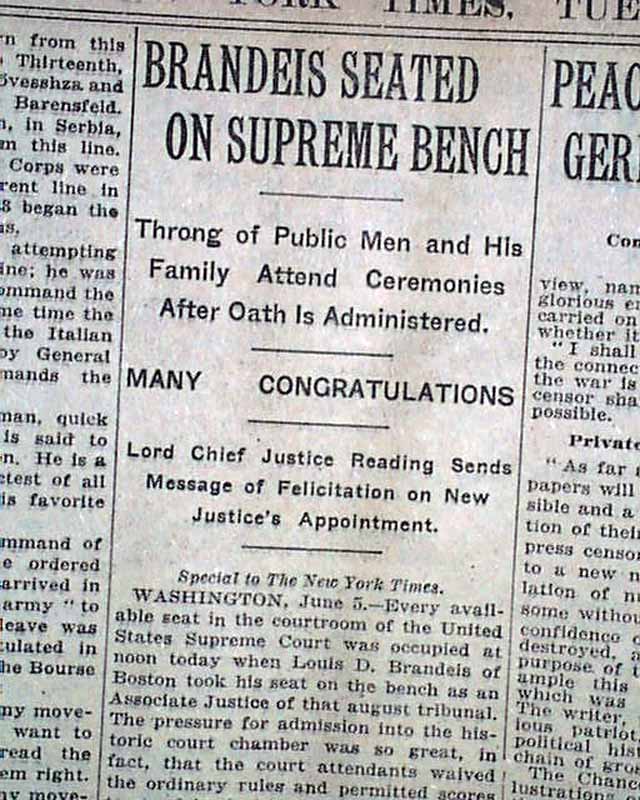 Page 6 carries a column-wide headline: "BRANDEIS SEATED ON SUPREME BENCH" with subheads "Throng of Public Men and His Family Attend Ceremonies After Oath Is Administered" "Many Congratulations" "Lord Chief Justice Reading Sends Message of Felicitation on New Justice's Appointment". "Every available seat in the courtroom of the United States Supreme Court was occupied at noon today when Louis D. Brandeis of Boston took his seat on the bench as an Associate Justice of that august tribunal... Chief Justice White, rising announced the appointment of Mr. Brandeis,... then announce the readiness of Mr. Brandeis to take the judicial oath, which was administered,... Justice Brandeis was then escorted by Frank Key Green, the Marshal of the court, to his seat on the extreme left of the bench. Members of the court bowed as he passed.... Mr. Brandeis took his seat...".
This was the seating of Louis D. Brandeis, the first Jewish Supreme Court Justice.
Complete in 24 pages with a slightly irregular left spine, otherwise in good condition. Should be handled with some care.