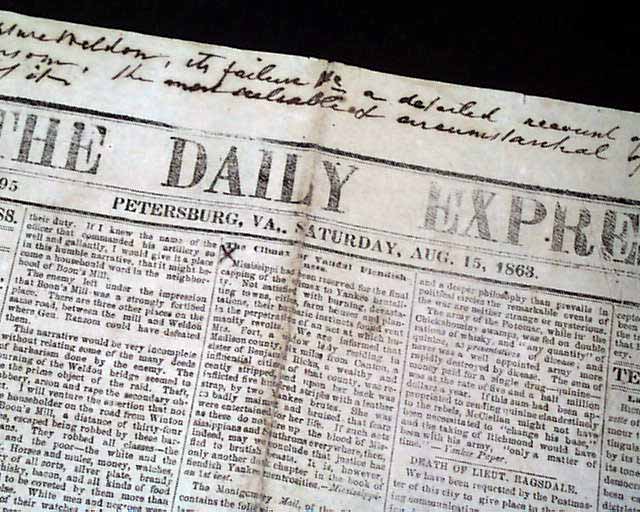 Petersburg was a critical city to the Confederacy, located not far south of the capital of Richmond, and the focus of a six month long siege when ended in early April, 1865, when Lee withdrew his troops from Petersburg and urged Jefferson Davis to remove the capital from Richmond. The war would end shortly thereafter.
This is an uncommon Confederate newspaper from Petersburg, with much front page war content including items headed: "From North Carolina" "The Raid against Weldon, N.C. through Hertford & Northampton Counties--Gen. M. W. Ransom Gallantly & Successfully Repulses the Enemy at Boon's Mill--The Enemy very Successful at Theft, Robbery, Arson and Rape" "What Has Become of the Men?" "Death of Lieut. Ragsdale" "Later from the United States" "Seymour & the Draft" "Trans-Mississippi News" "Mobile to Be Defeated to the Last" and more.
The back page has more war content, and includes an editorial as well, a portion including: "...We have been beguiled into these general remarks by a train of thought which we got into relative to the mode & manner in which the Yankee Government & people are conducting this war against the South. That they have covered themselves with irredeemable & unparalleled infamy there can be no question..." with much more. There is also a lengthy document headed: "To the Soldiers of the Confederate States" signed in type by Jefferson Davis, concerning amnesty & pardon being offered to deserters from the war.
Complete as a single sheet newspaper, minor rubbing at folds, some period writing above the masthead, generally nice condition.