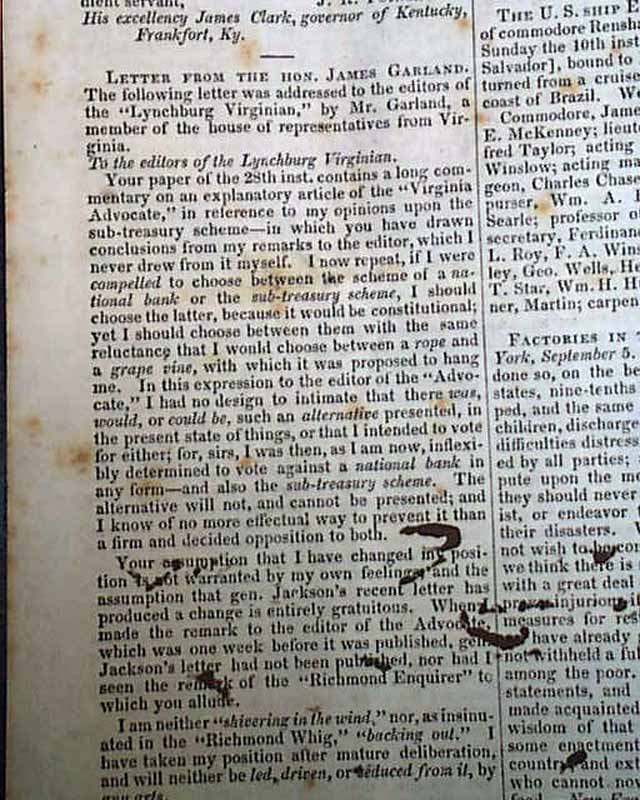 
NILE'S NATIONAL REGISTER, Washington D.C., Sept. 16, 1837  On the third page under "Use Of Bowie Knives" is the text of an "act" passed by the legislature of Alabama. The first section of the act states that: "...if any person carrying any knife or weapon, known as Bowie knives...on a sudden recounter, shall cut or stab another with such knife, by reason of which he dies, it shall be adjudged murder, and the offender shall suffer the same, as if the killing had been by malice and aforethought...". The second section says that anyone caught "...selling, giving or disposing..." of such a weapon, will be subject to a fine of one hundred dollars. This act was approved on June 30, 1837. There is also a footnote that says: "A similar act has passed in the state of Mississippi."
An article: "The Capitol" includes a nice descriptive report on the improvements to his iconic building. Very detailed and taking over half a page.
Sixteen pages, 8 1/2 by 12 1/4 inches, some ink stains to the front leaf, generally nice.